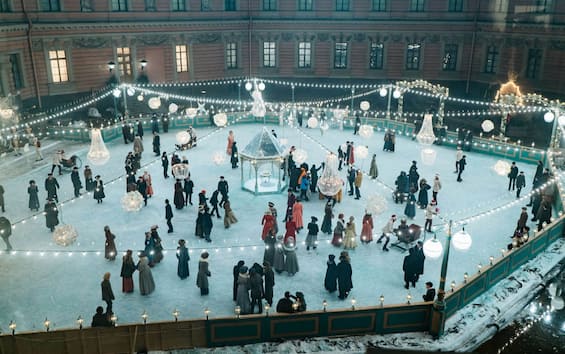 Silver skates it’s a Russian film of 2020 inspired by the popular 19th century novel by Mary Mapes Dodge. This version features some variations compared to the original story, first of all the setting. The events take place in Russia, to be precise in St. Petersburg, while in the book by Mary Mapes Dodge in the Netherlands. It was a productive choice, being a film made in Russia, which in any case does not change the sense of the story, which is also freely inspired by another narrative masterpiece, Romeo and Juliet.

The plot of Silver skates

The film is set in St. Petersburg during Christmas 1899. Winters are always very cold in those parts and so everything turns into an enchanted landscape. The soft white blanket of snow covers the roofs of the buildings in the historic center and the city’s canals have been transformed into ice roads along which to skate to move from one side of the city to the other or simply have fun. The protagonist of this story is a humble young delivery boy named Matvei, who works in a city bakery. He owns nothing but a pair of silver skates that belonged to his father. Matvej loses his job and is forced to join a gang of city pickpockets and so, almost as a bet, one night he enters the property of an officer and here he meets Alisa, his sad daughter, a beautiful girl forced to submit to very strict rules by her parents. That meeting will change both their lives forever, whose relationship is strongly opposed by her family.

The cast of Silver skates

The cast of the film is mainly made up of young and unknown Russian actors, who have shown great interpretive skills. Fyodor Fedotov is Matvej while Sof’ja Priss is Alisa Marija Augusta von Schlesenberg-Vjazemskaja. They are the two main protagonists of the film, to which are added: Aleksej Gus’kov, who plays the minister Vyazemsky; Severija Janušauskaitė as Severina Genrichovna. And then Kirill Zajcev, in the role of Prince Arkadij Trubeckoj; Yuri Borisov, who plays Alexei “Alex” Tarasov; Aleksandra Revenko, who is Margo; Timofey Tribuntsev as Petr. Finally, we find Yuri Kolokol’nikov, the Grand Duke; Denis Lavant, who plays Fourier and Cathy Belton, aka Miss Jackson.