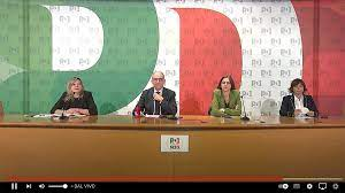 Letta gives the timing for the congress and ‘locks’ name and symbol, Bonaccini shares. Altolà dem: “No to dissolution”. Orlando indicates a political ‘crossroads’: “Which side are we on in the social conflict? It is an unsolved knot”.

In the very long Pd direction, a 10-hour ‘stream of consciousness’ river, there is a fixed point. The substantial agreement between all the dem components on the timing of the congress: the new secretary will be there by March. The timing is given by Enrico Letta by opening the meeting. The right time “for a new management team to be ready, it is the beginning of spring, the month of March”, says Letta. . There is the OK of the Riformista Base and there is no criticism even from the rest of the dems. Except Luigi Zanda. “The time allotted is not enough for a serious discussion”, he observes.


Another fixed point, collected by almost all the interventions, is that the Democratic Party should not be dissolved. Refounded yes, but no dissolution. Letta adds that, for him, even the symbol should not be touched. And hence the name. And then the alliances. He talks about it to say that he will talk about it again. They come later. First there is the identity of the lost Democratic Party, dissolved in the ‘governance’ of recent years. Even the number one theorist of the embrace with the 5 Stars, that is Goffredo Bettini, makes it clear that he is not thinking about “the dissolution, nor about a red or red-yellow thing”.

So the congress is to close by March. It will be a new meeting of the Management to enter into the concrete of the steps but the scheme remains the one identified by Letta of the 4 phases with the primary two for the secretary to close everything. Although the point of the primary has been addressed in several interventions. Peppe Provenzano and Cesare Damiano, among others, ask for an afterthought.

Orlando, ‘untie the knot, which side are we on in the social conflict?’

So far times, rules and points that recur in most of the interventions. Then there is everything else. The ‘knots’, so to speak. Andrea Orlando identifies a “substantial” one which is not dissolved and which remains divisive. It is fair to say that the Democratic Party must not dissolve, says the Minister of Labor, but the risk is that it will disappear anyway if a knot is not “untied”, that is, if it is not clear “which side we are on in the social conflict”.

Orlando argues: “We objectively have a pincer. The clear challenge of a party characterized as the party of the most enlightened elites, of the urban classes. And that of a party that embodies pieces of society in a social populist vision. So, if you say that you want to change the citizenship income those who have it, they don’t vote for you because they think you want to take it away and those who don’t want it don’t vote you because they think you want to keep it “.

In the Democratic Party there is “a neoliberal approach that persists” and then there are “those who believe it is necessary to criticize the development model. I am not saying that one way or the other is right, I say that if undoes this knot we are inevitably reticent on the social and economic agenda “.

Bonaccini, ‘regenerating our identity, we no longer discuss names and symbols’

Reticences that for Matteo Orfini are linked to the “renunciation of the construction of a political identity project. Since the Conte-bis was born, our proposal has been the broad field, that is an alliance. We have transformed the instrument into an end. We have sought the solution. of our weakness in others: entrusting ourselves first to Conte, then to Draghi. We don’t have the confidence to succeed “. He choices that “have transformed the Democratic Party into the party for the protection of the status quo”.

Bonaccini did not intervene in the management, as he had announced yesterday. His parents explain that he had to return to Emilia Romagna. But he does know how he thinks. “I agree with the path proposed by Enrico Letta, with whom we have been confronted in recent days: a true congress in which to reaffirm and regenerate the identity of the Democratic Party. We will do it in a certain and reasonable time, because the country needs a government but also of an opposition fully on the field. We are leaving today to discuss the project of the Democratic Party and of Italy. Not of alliances to come “.

“Analyzing the reasons for the defeat – he continues – is essential, but with an eye to the present and the future, because this is what we will be measured on. A congress to discuss with people in society, not in the enclosure of a room, because democracy is nourished by participation. And the fact that names and symbols are no longer discussed I consider a step forward: the problems we must face now are of substance, not form “.