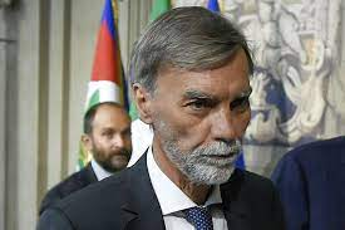 Also in the room Dario Franceschini. Speeches from Nardella to Bonaccini. Alfieri (Reformist base): “Let’s unite and coordinate immediately”, from Quirinale to electoral law.

The parent company Debora Serracchiani, the MEP Simona Bonafè, the coordinator of the Riformista Base Alessandro Alfieri (who takes the place of Lorenzo Guerini, engaged in Naples as a minister), numerous dem parliamentarians, mayors such as Dario Nardella and Mattia Palazzi and Stefano Bonaccini who, Unable to participate, he sent a letter read in the room. In the audience listening to Dario Franceschini too. A long and well-attended meeting today in Rome of the ‘Democratic Community’, the area of ​​Graziano Delrio. Indeed, “a space”, as the former group leader defines it, “alongside the efforts of Secretary Letta so that our party can feel like a real community”.

The push for a “radical reformism” in values ​​and ideas, attention to the territories and the enhancement of mayors and local administrators and then the construction of the coalition in view of the policies, a wide field from Matteo Renzi to Bersani and the 5 Stars. These are the points around which the meeting is structured and which bring together the various interventions. In short, the ‘reformist’ dem wing is on the move. And there are those who work to organize it. The goal, explains Adnkronos, is to create a ‘coordination of the reformists of the Democratic Party’.

A coordination that goes beyond the parliamentary groups and is also articulated on the territory. And it is no coincidence that attempts are made to tighten the project on the eve of the election of the President of the Republic. A way to ‘weigh’ more “in all the steps that await us in the coming weeks and months, including the electoral law”, he points out. The coordinator of the Riformista Base, Alfieri, said in his speech: “If I am here it is to say that we are here. We are here to build a broad cultural area that goes beyond the personalism of individuals. To unite the reformists in Parliament and on the territory , to share a political space that promotes initiatives and coordinates immediately on the most delicate political steps. I think that together we can build a new page in the Democratic Party “.

ex-group leader for radical reformism and wide field from Renzi to M5S, the ‘stakes’ of Provenzano

At the moment the ‘areas’ remain distinct but, listening to the interventions, there are many points in common. Delrio says: “Politics must return. The Draghi government is an important and necessary parenthesis, it must be supported but the best way to do it is for politics to start doing politics again, to give a horizon to a strategy for the future”. With the courage of “radical reformism” in principles and with attention to the territories. ‘Starting afresh from communities’ is the title of the conference. “On our part – explains Delrio – there is the will to be close to the territories and thus help our party to strengthen itself. This ruling class of mayors must have more and more the idea that this party is the party of their communities” .

As for the organization of the political offer, for Delrio the wide field must go from Renzi to the 5 Stars. As he explained also this morning in an interview. Serracchiani and Nardella agree. On the other hand, Peppe Provenzano is more cautious. The deputy secretary of the Democratic Party, host of the initiative, appreciates the spirit of ‘democratic community’: “We should all be united in a battle against the degeneration of currents” while it is useful “to create social spaces to inject politics into our discussion”.

And on the wide field from Iv to M5S, Provenzano observes alluding to Matteo Renzi: “The wide field is fine but with some fundamental rules: you have to choose the shirt because you can’t play one day with one team and one day with the other. .. “. And then even more explicit: “Let us open ourselves to the liberal forces that take on the themes of social sensitivity but let us also ask ourselves what it is to be liberal: I do not think it centers much with Saudi Arabia …”.

Nardella, ‘dialogue across the board from M5S to Iv’ – Serracchiani, ‘Pd center-left pin’

Nardella says: “I agree with Graziano’s interview. There is a new bipolarism and we see it also in Europe. If this bipolar approach remains, net of the electoral formula – I am skeptical that this Parliament will be able to vote a reform – I believe it has been accepted by recovering also the majority vocation of this party. It will be up to the Democratic Party to find the lowest common denominator: if we were all equal there would be no need to build a coalition “.

“I am not afraid to combine the moderate and reformist forces of the current majority that supports Draghi with the more markedly left ones. We must be able to make an effort of this kind. It is a difficult path but the only one to undertake in an all-out dialogue. from M5S to Italia Viva e Action “. And then Bonafè: “We must work to build a space from Renzi and Calenda to the 5 Stars but having the Democratic Party, its identity and its proposals at the center. These are the cases to win the elections, a less difficult victory than thought a few months ago “.

And again Debora Serracchiani: “This is our task, that of a large popular party, of a ‘radically’ reformist force which, as in the original ambition, addresses the whole of society. This authentically reformist vocation, also rewarded in the recent elections , makes us central and pivot of the center “. And for Andrea De Maria: “It is time to say clearly that the season of populism is over. For the Democratic Party the challenge is to get out of the cage of currentism to build a ruling class capable of truly sharing a collective project. The Agora can be a great opportunity to open the Democratic Party to many forces and energies and to focus our work on ideas for the country “.