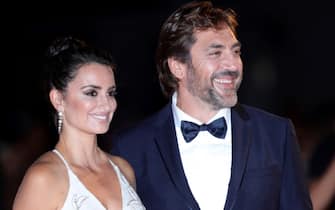 Last summer Penélope Cruz and Javier Bardem celebrated 11 years of marriage. It was July 14, 2010 when they secretly married in the Bahamas. Then, always away from the spotlight, two children arrived: Leo, born in 2011, and Luna, born in 2013

The perfect garment, trailer for the movie with Javier Bardem

Penélope Cruz and Javier Bardem met on the set of Ham, ham (1992) by Bigas Luna, the first acting rehearsal for the Spanish actress who grew up in the world of dance. Four years later comes a new film that sees them together in the cast: it is Màs que amor, frenzy directed six hands by Alfonso Albacete, David Menkes and Miguel Bardem.

Being the Ricardos, Nicole Kidman and Javier Bardem movie trailer

The same year they also act for Manuel Gòmez Pereira in his Love seriously damages health. It is Pedro Almodòvar who makes them meet again on the set with Carne tremula, a 1997 film that marks the artistic turning point of Cruz, who became the director’s muse. Their characters never meet in the course of the narrative but the two will be destined to meet again.

Javier Bardem, how the Spanish actor has changed. PHOTO

In 2001 Agustìn Dìaz Yanes chooses them for the comedy No news from God, while in 2008 it was Woody Allen who directed them as protagonists in Vicky Cristina Barcelona, a particularly favorable occasion for the birth of their love. Interpretations much appreciated, especially that of Cruz who takes home the Academy Award for Best Supporting Actress

Javier Bardem: the best films of the Spanish actor

After their wedding, they return to act together: this time directed by Ridley Scott in The Counselor. Passion, intrigues and shady deals instead mark their cinematic relationship in Escobar – The charm of evil, by Fernando Leòn de Aranoa, where they perfectly describe the relationship between the famous Colombian drug trafficker and the journalist Virginia Vallejo, his lover

Penelope Cruz and husband Javier Bardem all film together

Their appearances on the red carpets are quite rare, but he often misses something about his private. Like when he said for example, referring naturally to his Penelope: “She has what I call ‘the blood of love.’ She puts passion into everything. This is very attractive to me. There are beautiful women and sexy women. Penélope is both things”

Everyone knows: here is Penelope Cruz and Javier Bardem, a couple on the set and in life

Penélope Cruz Sánchez was born in Madrid and is the daughter of Eduardo Cruz and Encarna Sánchez. She started acting at the age of 15 and, from there, despite the language barriers and lack of contact, she found an agent and made her way. Before starting acting, Penelope Cruz studied dance for nine years

Javier Bardem was born in the Canary Islands on March 1, 1969 but grew up in Madrid. Her mother was one of the most talented actresses of her generation, while her grandparents were also actors. Javier initially resisted following in the family footsteps, despite appearing in the film El Picaro at the age of six and starring in several TV series as a young man. Before starting acting seriously as brother Carlos and sister Monica, he trained as an artist. A talented sportsman, he has also become a member of the Spanish national rugby team.

Yesterday and today, how Penelope Cruz has changed

Penélope Cruz won the Oscar for Best Supporting Actress in 2009 for the film Vicky Cristina Barcelona.

Throughout her career Penélope Cruz has won numerous awards, including an Academy Award and a BAFTA for Best Supporting Actress for her performance in the film Vicky Cristina Barcelona, ​​directed by Woody Allen. It has also won three Goya Awards out of eleven nominations received

Penelope Cruz: the most beautiful photos of the actress

Javier Bardem was nominated three times for Academy Awards: Best Actor for Before Night and Biutiful; Best Supporting Actor for No Country for Old Men, winning it for the latter film. In addition, he won a BAFTA Award, six Goya Awards, two Volpi Cups for Best Male Interpretation at the Venice International Film Festival and the Prix Interprétation masculine at the Cannes Film Festival. In 2012 he received the star honor on the Hollywood Walk of Fame.

In recent days, Javier Bardem is presenting his latest film, ‘The Perfect Boss’, by Fernando León de Aranoa, nominated for an Oscar for Spain as the Best Foreign Film