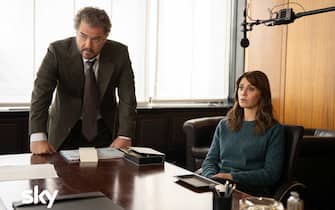 Inspector Petra Delicato is permanently in force in the Genoa furniture operating sector and still has Deputy Inspector Antonio Monte at her side. Their relationship of mutual esteem and friendship has now consolidated, despite the differences in age, gender, life experience and worldview. Together they are an unprecedented detective couple and two unattainable drinking buddies

Petra, the second season on Sky with four new stories

Supported by the same team of colleagues, Petra and Antonio find themselves once again facing a series of very different crimes: a murder within an exclusive district; a chain of deaths among the homeless; a double murder linked to a past crime; the theft of a gun – and not just any gun – that guides Petra and Antonio to discover the dramatic universe of the baby gangs

Stories, Paola Cortellesi tells about herself in “Something overwhelming”

Having overcome the differences of character and method that characterized the first season, Petra and Antonio have become the perfect match for each other, both in professional and private life. One might think that they need nothing more than this perfect balance of theirs to live happily. On the other hand, love is an overrated sentiment, said Petra with such certainty as to convince even her much more traditionalist deputy inspector

Petra, the second season arrives. From 21 September on Sky and NOW

But life always has surprises in store. Especially when you are ready to question yourself and listen to a further, unexpected, desire for change. And so, this second season requires Petra and Antonio not only to solve increasingly complex investigations, but also to open up to the possibility that new encounters mark the beginning of a new, surprising phase in their lives.

Sky schedules, the faces of the next season of cinema and PHOTO series

The four new stories, branded Sky Original produced by Sky, Cattleya – part of ITV Studios – and Bartlebyfilm in collaboration with BETA FILM, are always set in Genoa, and were written by Giulia Calenda, Furio Andreotti and Ilaria Macchia and taken from the works by Alicia Giménez-Bartlett, published in Italy by Sellerio. Paola Cortellesi also took part in the screenplays

Petra, the cast of the detective story with Paola Cortellesi. PHOTO

Petra will debut on September 21, exclusively every Wednesday at 9.15 pm on Sky Cinema Uno, streaming only on NOW and available on demand

Silver Ribbons, Petra and Romulus series of the year

In the cast, in addition to Paola Cortellesi and Andrea Pennacchi, there are also Manuela Mandracchia and Francesco Colella, respectively in the roles of Beatrice and Marco, two new characters who will revolve around the lives of Petra and Monte. The psychoanalyst Riccardo is played by Sergio Romano

The stories are taken from the works of Alicia Giménez-Bartlett, published in Italy by Sellerio

It is not the first time that Cortellesi has taken up the same role again. He had already happened with Like a cat on the ring road. This time to stimulate the actress was the continuous evolution of her character. “Petra’s growth parallels that of her companion Monte. If one thing changes for one, it also changes for the other – explains Cortellesi – At the stimulus of Petra, Monte opened up to new life, he met a woman, Beatrice (Manuela Mandracchia). But then Petra will come face to face with loneliness ”

“Monte has evolved in a natural way – explained Pennacchi – Thanks to Petra, a whole series of doors are opened to him that he had thought never to open. He does not fix the things of the past, but enters a new world, both the relationship with his son is by finding a mate. Of course by choosing love, he causes a problem for Petra and increases her unhappiness. Di Monte I like his patient stubbornness, a kind of strength that leads him to always go on, to bear anything and then bring order back to a chaotic world ”