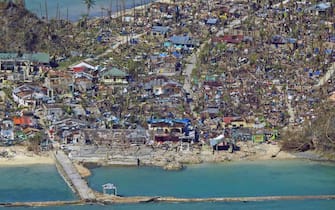 At least 18 dead: this is the death toll of the typhoon Rai that hit the Philippines in recent days

WATCH THE VIDEO: Tifone Rai in the Philippines, the river drags home away

The devastation seen from above

This is the strongest typhoon that hit the country this year

Philippines, all the news

Typhoon Rai devastated the southern and central regions of the country

More than 300,000 people have fled from their homes and beach resorts

More than 18 thousand rescuers between the army, police, coast guard and firefighters have joined the search and rescue efforts in the most affected regions

“There has been serious damage” especially a Surigao and Siargao, said by the disaster agency

The devastation seen from above

According to the United Nations, they are at least 13 million people affected by the typhoon

Typhoon Rai hit the country with winds of up to 165 mph, heavy rains and floods

He uprooted trees, damaged electricity poles and destroyed some buildings

THE damage after the passage of Typhoon Rai

THE damage after the passage of Typhoon Rai