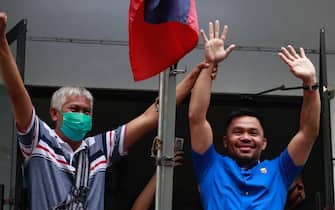 “I will fight drugs in the right world”: Manny Pacquiao, former boxer among the best ever in the discipline, he is in the running to become the next president of the Philippines. The senator met with his supporters in the capital Manila, in view of the elections scheduled for next May

WATCH THE VIDEO: The challenge of the French presidential elections is all right

Human rights activists and political opponents accused the police of having summarily killed suspected of drug dealing: the authorities, however, have always maintained that the people killed were armed and had tried to escape arrest with violence

Typhoon in the Philippines, at least 375 dead and 480 thousand displaced

In an international press meeting this week, Manny Pacquiao said he plans to fight drug-related crime “The right way”, apparently breaking free from the current president

Pacquiao also left the door open for a Philippine return to the International Court of Justice, better known as the Hague Tribunal, from which Duterte withdrew the country in 2018. The current president has announced that he will not run again and will leave. active policy at 77 years of age

The former boxer also made it known that he wanted a peace table with Chinain an attempt to resolve the territorial disputes affecting the South China Sea: “Our goal is to be friends from all countries“, he said

Manny Pacquiao is considered one of the strongest boxers of all time: he is the only one in history to have won in eight different weight classes, winning 12 champion belts

In 2015 he took part in what was renamed “the meeting of the century”, The match between him and Floyd Mayweather: the event generated a revenue of 500 million dollars, the most profitable in boxing history. Mayweather won the bout by unanimous decision

Pacquiao announced in September its intention to withdraw from boxing to run for the presidency of the Philippinesbut he is not without political experience: he was a member of Congress from 2010 to 2016, before becoming a senator

In November 2016 he won the world title Wbo, becoming the first senator in office, of any nationality, to win a boxing world title. Idol at home, polls indicate this, however away from the head in the run up to the presidential elections: the candidate Ferdinand Marcos Jr is in fact credited with over 50% of the votes