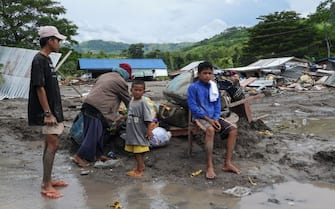 The strong wind and the heavy rains of the storm tropical Nalgae caused dozens of deaths in southern Italy Philippines. Some people, however, are still missing and rescuers continue to search in the mud, in the area where the ground has collapsed

The most affected areas floods are found onMindanao islandin the south of the archipelago: in particular the province of Maguindanao and the city of Cotabatoin the autonomous region of Bangsamoro

There storm hit predominantly during the night between Saturday and Sunday, sweeping everything in its path and provoking power outages

Now the typhoon it’s moving to the north and it is feared that it could hit the capital Manila. Rain and wind have begun Thursday and it is expected that they will reach maximum strength in the next days

Rescuers they are using i inflatable boats to recover people stuck in the house due to high water: some have been forced to take refuge on the roofs of houses

The authorities of the affected areas they evacuated part of the houses, the departures of the ferries were suspended and some schools have been closed

In the Philippines typhoons and tropical storms are quite frequent and Nalgae was not expected to be particularly violent, but the rain was more abundant than expected and slower relief efforts

In some areas the maximum rainfall record in one day was reached. “We were prepared but unfortunately the rains were more abundant of how much budgeted, ”he commented Naguib SinarimboMinister of the Interior of the Bangsamoro Autonomous Region, inMindanao island

A average of 20 among typhoons and storms hit them Philippines every year killing people and livestock on the their path and ravaging farms, houses, roads and bridges, although the south is rarely affected

So long as the planet is struck by the global warmingstorms and typhoons are becoming more powerful, scientists warn