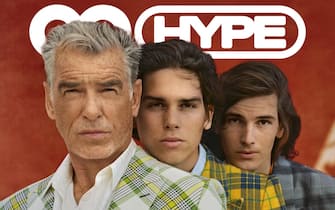 Pierce Brosnan and his two sons Dylan and Paris, 25 and 21, are the protagonists of a photo shoot for GQ, accompanied by an interview with three

Pierce Brosnan yesterday and today: how the 007 actor has changed

As a child Dylan always thought that his father had many friends, because people often stopped him on the street: only when he grew up did he understand that those were not friends, but fans

The Son, the cast of the tv series with Pierce Brosnan. PHOTO

Pierce Brosnan was born in Ireland in ’53: next year he will blow out 70 candles

Dylan attended high school and college in Los Angeles, but before that he and his brother Paris lived between California and the family home on Hanalei Bay in Kauai, Hawaii.

The Son – The Son, here is the trailer for the second season

Life in Hawaii was pretty normal. “A gang of kids running around in the woods, looking for something to do, bicycling down the street, ducking into caves and swimming and surfing and stuff like that,” Dylan told GQ.

Dylan and Paris also spent time on their father’s sets and both worked behind the scenes for his films as adults.

Brosnan has always advised his children against pursuing an acting career: “Just because it’s a hell of a job. It is a cross to carry. You build yourself and you destroy yourself ”

Pierce Brosnan will star in the science fiction film Youth

Paris paints, surfs and works as a model: she walked the catwalk for Balmain, Dolce & Gabbana and Moschino

Dylan has also worked with Thom Zimny, the director of documentaries on Willie Nelson, Elvis and Springsteen

In 2020, Dylan and Paris helped distribute the awards during the Golden Globe live broadcast

Pierce Brosnan loves to paint. “It calms me down – he explained in the interview – wherever I go I create studies”