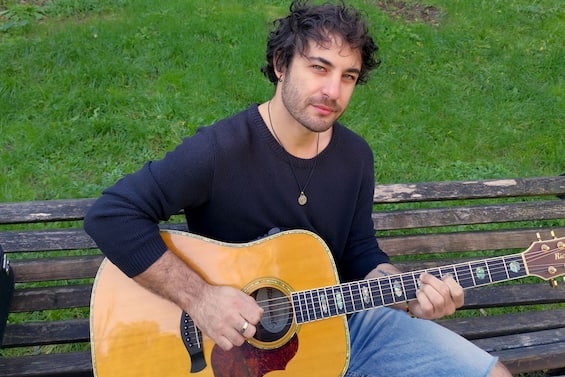 I’m Pietro Falco, someone knows me as a songwriter, someone else as a guitarist, but basically I’ve been making music practically all my life, in every way and by any means. To say that music is my life would be an understatement… Over the years I have tried to follow other paths as well, the ones that most people define as “normal”. I attended university, I had other jobs, but I was sick. I felt like I was living someone else’s life, so I found a way to make music my job, producing and playing for others, composing soundtracks and music for short films and writing my own songs at the most unlikely of times, thus returning to breathe. At the age of two I sat down at the piano for the first time and from that moment I fell in love with music. I started playing the guitar when I was eight thanks to the music of Lucio Battisti, Edoardo Bennato and other Italian songwriters. Then I discovered rock and blues and funk and everything else didn’t matter. I have collected my first songs in a notebook for years and since 2014 I have been publishing my unreleased songs. In 2015 I finished second at the Castrocaro Festival and from that moment I began a journey that led me to produce music for other artists as well. I released two records as a soloist and this new project started in 2022.

To get lost it’s my fourth single and it’s a song I’m particularly fond of. I wrote it on my thirtieth birthday, after a lunch of carbonara and red wine. On my way home I was thinking about how unpredictable life is, I had a series of images scattered through my head, I collected them and I realized that they had a common thread: growth and its acceptance, “to stay afloat”, as I sing in this song. It seems like a trivial concept, but I think the course of life has the shape of a sine wave. There are ups and downs, changes, losses, moments of discomfort, fear, but in the end there is always a force that pushes us to go back up. Often it depends on our attitude. It’s quite an experimental song, as I’ve given a lot of space to electronics. I put the guitars in the background, a decidedly rare event!

The video clip of To get lost directed by Piergiorgio Santolini it was shot in different neighborhoods of Rome: Trastevere, the Aventino, Testaccio (the neighborhood where I used to live). There are also some scenes set in the Giardino degli Aranci, the place where I often go to write. During the shooting, in Piazza Santa Maria in Trastevere, I stood still for about two hours, while people passed around me. Same thing on Ponte Sisto, where most of the tourists stopped asking me who I was and if I was a famous singer… it’s it was embarrassing but i had a lot of fun.