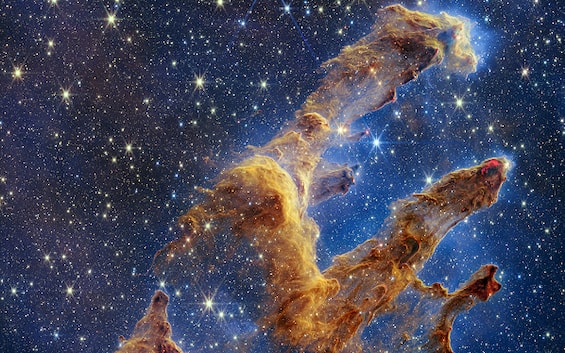 The James Webb Space Telescope, owned by NASA, the European Space Agency (ESA) and the Canadian Space Agency (CSA), has immortalized the most famous cradle of stars, the ‘Pillars of Creation’: columns of interstellar gas and dust about 6,500 light years away , inside which the new stars are formed, which are estimated to be only a few hundred thousand years old (HOW THE WEBB TELESCOPE WORKS).

Clouds of stars visible on the outside of the pillars

The same photo, taken in 1995, had made the Hubble telescope (by NASA and ESA) famous: it is in fact considered one of its 10 best shots, but the difference in detail and precision with the new photographs by Webb is remarkable. In the images, the pillars look like majestic rock formations, but the new stars in formation, visible on the outside of the pillars, steal the show. The wavy lines that look like lava are caused by the newborn stars, which periodically launch jets that collide with the surrounding clouds of material.

Webb was unable to “cross” the clouds and reveal new galaxies

The reddish light comes from energetic hydrogen molecules, produced during the ejections of material and collisions that occur within these gas columns. This time, however, Webb was unable to ‘cross’ the clouds to reveal what lies behind them, although it may seem the opposite: the images, in fact, do not contain galaxies in the background. The cause is the mix of translucent gas and dust known as the interstellar medium, which prevents us from seeing deeper. These new shots of the Pillars of Creation will help researchers better understand the processes of star formation, as well as their death (VIDEO FROM NASA).