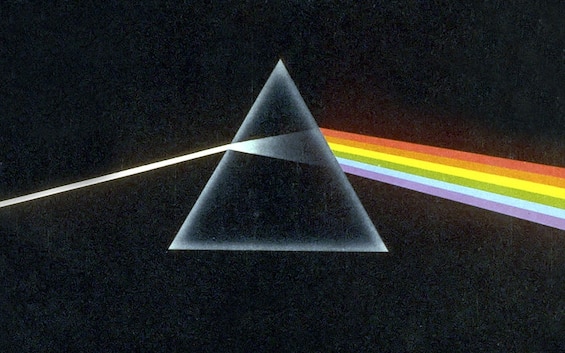 Published in March of 1973, The Dark Side of the Moon it immediately became a milestone in the history of music. A commercial success too, if we consider that the album remained in the top places of the sales charts until 1988 and today it is estimated that a copy of the disc is found in the homes of one English family out of five. However, the greatness of this work must be understood by going beyond the cold numbers, also because this work was fundamental for definitively framing the Pink Floyd. It was not an easy record (although the instrumental parts had been reduced) nor a cheerful work, with all its philosophical reflections on the “dark side” of the human being. Nevertheless The Dark Side of the Moon it resisted over time, arriving to be celebrated even today, half a century after its release, in a very special way. For the fifty years of the masterpiece by David Gilmour and partners it was in fact decided to do things on a grand scale, announcing a book and a box set specially prepared for the occasion.

Snapshots from the past

The volume will be released in March, in conjunction with the anniversary to be celebrated. The title chosen for this celebratory operation is indeed quite trivial (The Dark Side of the Moon by Pink Floyd) but can count on content that promises to live up to expectations. The work consists primarily of a flood of rare or even unpublished photographs of the band on stage and backstage, taken during the tours between 1972 and 1975. To this treasure must be added another 129 snapshots in black and white, documenting soundchecks, concerts and after shows and were shot by big names in photography such as Storm Thorgerson or Jill Furmanovsky. The latter is particularly professionally linked to the album, given that right between the recordings of The Dark Side Of The Moon and the ensuing UK record tour she essentially became the band’s official photographer. A role that definitely made her long career blossom, then she continued over time collaborating with names of the caliber of the Rolling Stones, Bob Dylan and Oasis. Furmanovsky also witnessed with his camera one of Pink Floyd’s most remembered concerts, that of October 1972 at Wembley Stadium, which is recalled with a review originally published in the Melody maker and now included in this special edition for the 50th anniversary of the disc. To complete the work, then there could be what on the publisher’s website Thames And Hudson it describes itself as a “luxurious box set containing a reissue of the album along with numerous related pieces of music”. On this last extra cadeau however, at least until there is an official confirmation on the band’s channels, we don’t feel like putting our hand on the fire.

Us and Them, today as it was fifty years ago

It didn’t escape the creators of the album’s half-century celebration that one of the most important elements for the album’s success was its iconic and mysterious cover. For this reason, among the promised contents, there will also be pages dedicated to the birth of the cover. Aubrey “Po” Powell (who together with Thorgerson had been one of the founders of the studio Hipgnosis responsible for many iconic rock illustrations) had already revealed something about the genesis of the prism, in a recent interview with Republic (in which to be honest, he also suggested that he also expect something special for the anniversary of The Dark Side of the Moon). To the Italian newspaper, Powell had confessed that before arriving at the final illustration, many alternatives had been examined, some decidedly imaginative and even inspired by the world of comics: “We presented ambitious ideas, including a Silver Surfer among the galaxies, but the Floyds asked for a simple graphics. I was reading a book on elementary physics and that’s where the idea of ​​the prism comes from. Too basic for us, but the band had no doubts. And he was right. That symbol changed our lives, it ended up in space and in anti-war rallies”. The image that was associated with the album has now become truly immortal like the music contained in the album, best representing that stratified work that also spoke of the transience of time and inner conflict among other things. Songs like Us and Them they still contain a very current (pacifist) message and it will not be a coincidence that Hans Zimmer has also rearranged them Eclipse to make it the main theme of the trailer for a sci-fi blockbuster like Dunes, winner of the Oscars just last year. Pink Floyd’s music fifty years later still seems to come from the future, perhaps because that halo of mystery that obscures the moon has never really ceased to fascinate us?