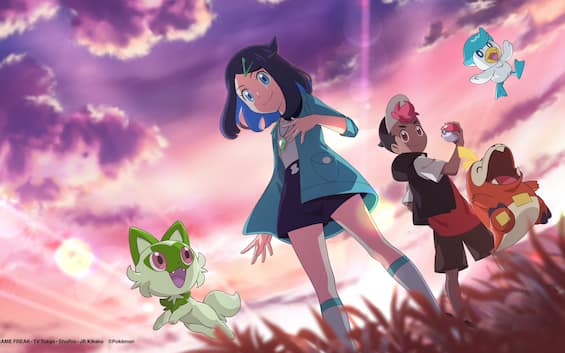 An incredible and exciting announcement, especially for fans of all things related to the Pokemon universe. This is what “The Pokémon Company group” did, unveiling a new Pokémon animated series that will follow a plot and characters never seen before, including Liko and Roy in the Japanese version.

Some details to know

What details do you need to know? First of all, it should be known that the new series will debut in all markets starting from 2023 and will feature Sprigatito, Fuecoco and Quaxly, the first adventure companions of the Pokémon Scarlet and Pokémon Violet video games, as well as the legendary Pokémon Rayquaza in a chromatic version. Furthermore, fans will be able to delve into all the mysteries of the Pokémon world, savoring the results of fierce battles between trainers and hilarious encounters with Pokémon.

The new series, by the way, will debut at the end of the current season of the Pokémon cartoons, “Pokémon Super Expeditions”, in which Ash Ketchum and his Pikachu win the Tournament of the Eight Pros of the World Tournament for the crowning. After Ash’s historic victory, which culminated in the 25th season with the long-awaited conquest of the title of World Champion, it will then be possible to celebrate his journey with a special collection of episodes. Among the returns to report, also those of Misty and Brock, and you can also taste a whole series of clues about what the future has in store for the strongest coach in the world.

All updates on the Pokemon world

The expectations of the fans, it was promised, “will not be disappointed, because in the new animated series they will be able to find all the elements that make Pokémon cartoons special: action, adventure, friendship and, of course, Pokémon”. Further curiosities about the new animated series will be revealed in the not too distant future. However, to not miss out on upcoming news, follow @PokemonIT on social media and subscribe to the official Pokémon channel on YouTube. New episodes of the “Pokémon Super Expeditions” series air on K2 at 9:00am every Saturday. But you can also catch up on previous episodes on demand on Discovery+.