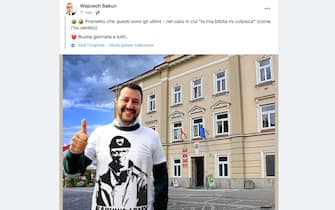 The visit of Matteo Salvini to Poland immediately resulted in the meme, where the leader of the League was also challenged by the mayor of Przemysl, Wojciech Bakun, who showed a shirt with Putin’s face and addressing the secretary of the Northern League said: ” I don’t receive it, come with me to the border to condemn him “. The mayor, in the following hours, then shared on his Facebook page some of the many memes that began to circulate on the web after the episode: in one of these Salvini wears a shirt with Bakun’s face

WATCH THE VIDEO: Poland, memes about Salvini and Putin’s shirt

One of the memes shared by the Polish mayor takes up the famous phrase that Salvini said on a television program about the use of outdoor masks, modifying it for the occasion

Ukrainian war, Salvini disputed in Poland: the mayor of Przemysl does not receive him. VIDEO

Could not miss, among those reposted by Bakun, a meme starring the Simpsons, published by the page Daily updates from the Third Republic – AQTR

There are also those who propose to make a shirt in the shirt, with the print of the moment in which Bakun showed Salvini the garment with Putin’s face

“I wanted that of Maradona”, says one of the memes reposted by Mayor Bakun and made by Blue courier

Then there are those who reverse the protagonists, making Putin wear a shirt with Salvini’s face