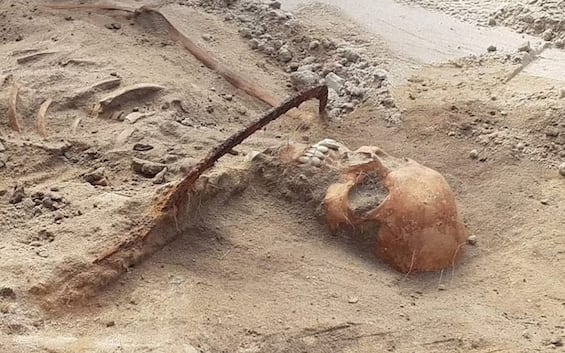 A scythe at the neck and a lock attached to the left big toe. Thus, the skeleton of a woman who died in the 17th century was found in the cemetery of the village of Pien (in south-eastern Poland). According to the archaeologists who made the macabre discovery, it would be the remains of an alleged vampire “stuck” at the burial site to avoid that, waking up, could terrorize the local population.

The woman, whose age was not indicated, had a silk hat on her head, a symbol of high social status. “The scythe was not stretched out but placed on her neck in such a way that if the deceased tried to lift her head she would be cut or injured,” Dr. Poliński, a member of the team of archaeologists, told the Daily Mail. The padlock, he stressed again, “symbolizes closure and the impossibility of returning”. The accusation of vampirism, however, may not be the only explanation for this macabre find. As specified by the experts to the Daily Mail, in fact, the symbol of the scythe “protected pregnant women, children and the dead from evil spirits”, therefore it cannot be excluded that it could be benign rituals, and not measures to counter monsters.

That of the scientists of the Nicolaus Copernicus University of Toruń would not be the first testimony of this ritual, the result of a superstition that has spread to Slavic countries in the past centuries. In 2008 in the village of Drawsko, in the district of Czarnków and Trzcianka, six skeletons were found subjected to similar treatment. “Of these six individuals, five had been buried with a scythe on their throat or abdomen, so they could cut off their heads or bellies in case they attempted to get out of the grave,” said Lesley Gregoricka of the University of South Alabama. Two of the skeletons also had large stones under their chins, placed there to prevent them coming back to life to bite other people.