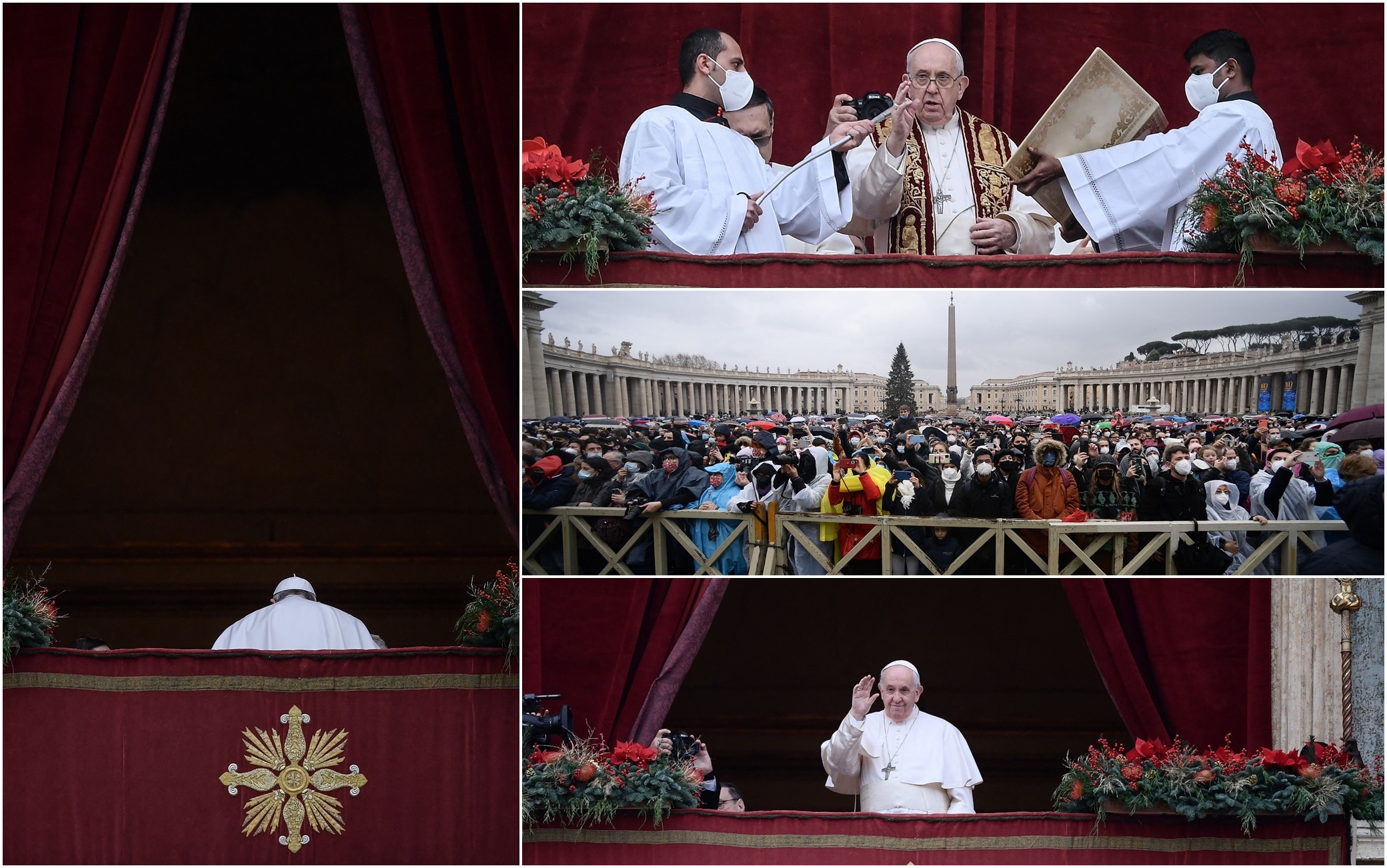 After yesterday’s Christmas Eve Mass, Pope Francis gave the usual Christmas Message and the Urbi et Orbi Blessing. Instead of from inside the Basilica, as happened in recent occasions, the Pontiff has returned to speak outside from the central Loggia of San Pietro. “Only dialogue leads to the resolution of conflicts,” Bergoglio said. Then he mentioned several countries calling for peace, from the Middle East, to Ukraine, to Sudan. There are many topics covered: from migrants, to international crises, to anti-Covid vaccines, to violence against women, to the environment.

“Child of Bethlehem, allow the many prisoners of war, civilian and military, of recent conflicts, and those imprisoned for political reasons to return home soon,” Pope Francis asked in his message. “Do not leave us indifferent in the face of the tragedy of migrants, refugees and refugees. Their eyes ask us not to turn away, not to deny the humanity that unites us, to make their stories our own and not forget their dramas, “he added.

The invocations: from solutions to overcome the pandemic, to comfort for women victims of violence

Bergoglio then also spoke about the coronavirus situation. “God-with-us, grant health to the sick and inspire all people of good will to find the most suitable solutions to overcome the health crisis and its consequences”, he pleaded. “Give hearts generous, to get the necessary care, especially vaccines, to the populations most in need. Reward all those who show attention and dedication in caring for family members, the sick and the weakest,” he added. And again: “Son of God, comfort the victims of violence against women that is rampant in this time of pandemic. Offer hope to children and adolescents who are bullied and abused. Give consolation and affection to the elderly, especially to those who are more alone. It gives serenity and unity to families, the primary place of education and the basis of the social fabric. “Finally, the last invocation:” Eternal Word that you became flesh, make us attentive to our common home, which is also suffering from neglect with which we often treat it, and spurs the political authorities to find effective agreements so that the next generations can live in an environment that respects life “.

“Only dialogue leads to conflict resolution”

In his message, the Pontiff also spoke of the numerous conflicts, international crises, wars that dot the planet. “’What would the world be without the patient dialogue of so many generous people who have kept families and communities together?’ (Enc. Brothers all, 198). In this time of pandemic we realize it even more. Our capacity for social relations is severely tested; the tendency to withdraw, to do it by oneself, to give up going out, to meet, to do things together, “said Pope Francis.” And also at the international level there is the risk of not wanting to dialogue, the risk that the complex crisis leads us to choose shortcuts rather than the longer paths of dialogue. But these alone, in reality, lead to the resolution of conflicts and to shared and lasting benefits ”, he stressed. Indeed, he added, “while the announcement of the birth of the Savior, source of true peace, resounds around us and throughout the world, we still see many conflicts, crises and contradictions. They seem to never end and we hardly notice them anymore. We are so used to it that immense tragedies are now passed over in silence; we risk not hearing the cry of pain and despair of so many of our brothers and sisters “. “But behold, in the middle of the night, the sign of hope! Today, ‘the love that moves the sun and the other stars’ (Par., XXXIII, 145), as Dante says, became flesh – he said again the Pontiff – He came in human form, he shared our tragedies and broke the wall of our indifference. In the cold of the night he stretches out his little arms towards us: he needs everything but he comes to give us everything. we ask for the strength to open ourselves to dialogue. On this feast day we implore him to arouse in the hearts of all yearnings for reconciliation, yearnings for fraternity. To him we address our plea “.

The Pope then mentioned some areas of the world where there are conflicts. “Let’s think of the Syrian people, who have been living in a war for over a decade that has caused many victims and an incalculable number of refugees – he said -. Let’s look at Iraq, which is still struggling to get up after a long conflict. Let’s listen to the cry of the children. rising from Yemen, where a huge tragedy, forgotten by all, has been taking place for years in silence, causing deaths every day. We remember the continuous tensions between Israelis and Palestinians, which drag on without solution, with ever greater social and Let’s not forget Bethlehem, the place where Jesus saw the light and which lives difficult times also due to the economic difficulties caused by the pandemic, which prevents pilgrims from reaching the Holy Land, with negative effects on the life of the population. Lebanon, which is suffering from an unprecedented crisis with very worrying economic and social conditions “.

The Pontiff also recalled other countries that are suffering. “Baby Jesus – he said -, give peace and harmony to the Middle East and to the whole world. Support those who are committed to giving humanitarian assistance to populations forced to flee their homeland; comfort the Afghan people, who have severely tested by conflicts that have pushed many to leave the country. King of the peoples, he helps the political authorities to pacify societies upset by tensions and conflicts. Support the people of Myanmar, where intolerance and violence often affect the Christian community as well and places of worship and obscure the peaceful face of that population. Be light and support for those who believe and work, even going against the tide, in favor of encounter and dialogue, and do not allow the metastases of a gangrenous conflict to spread in Ukraine. Prince of Peace, assist Ethiopia in rediscovering the path of reconciliation and peace through a sincere discussion that puts the needs of the population first. hear the cry of the people of the Sahel region, who experience the violence of international terrorism. Turn your gaze to the peoples of the countries of North Africa who are plagued by divisions, unemployment and economic disparity; and relieves the suffering of the many brothers and sisters who suffer from internal conflicts in Sudan and South Sudan. May the values ​​of solidarity, reconciliation and peaceful coexistence prevail in the hearts of the peoples of the American continent, through dialogue, mutual respect and recognition of the rights and cultural values ​​of all human beings “.

Yesterday, Friday 24 December, the Pope’s Christmas Mass began in the Basilica at 7.30 pm, in front of 1,500 people. “Embracing Jesus in today’s little ones”, the least and the poor, putting aside contempt and indifference, and striving to give “dignity to work”, avoiding the very serious plague of “white deaths”: these were the main themes touched upon by Bergoglio during the homily.