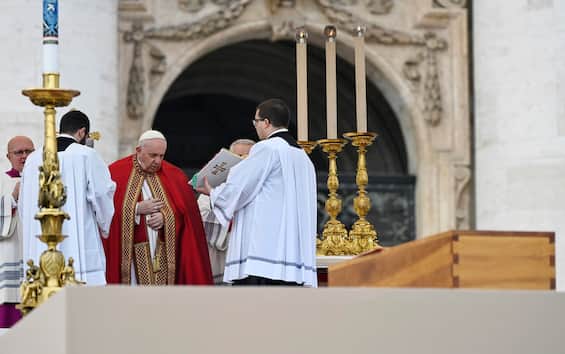 “Blessed, faithful friend of the Bridegroom, may your joy be perfect in hearing his voice definitively and forever”. Pope Francis’ homily for the funeral of Pope Emeritus Benedict XVI contains Ratzinger’s name only once, but it is all characterized by his presence. Bergoglio starts from the page of the Gospel dedicated to the last words that the Lord spoke on the cross: “Father, into your hands I commend my spirit”, and asks to “entrust our brother to the hands of the Father: may these hands of mercy find his lamp lit with the oil of the Gospel, which he shed and witnessed during his life” (ALL UPDATES LIVE – PHOTOS – SPECIAL – ALL VIDEOS)

“The Love That Can’t Be Lost”

“We are here with the scent of gratitude and the ointment of hope to show him, once again, the love that is not lost; we want to do it with the same anointing, wisdom, delicacy and dedication that he has been able to bestow over the years “, Pope Francis continued in his homily at the funeral of Benedict XVI. “It is the faithful people of God who, gathered together, accompany and entrust the life of those who have been their shepherd”.

During the homily for Ratzinger’s funeral, Bergoglio draws attention to the “praying dedication, which is shaped and silently refined between the crossroads and contradictions that the pastor has to face and the trusting invitation to tend the flock. As the Master carries on his shoulders the weariness of intercession and the wear and tear of the anointing for his people, especially where goodness has to struggle and the brothers see their dignity threatened.In this meeting of intercession the Lord goes generating the meekness capable of understand, welcome, hope and bet beyond the misunderstandings that this can arouse. Invisible and elusive fruitfulness, which arises from knowing in whose hands the trust has been placed. A praying and adoring trust, capable of interpreting the actions of the pastor and adapting the his heart and his decisions in God’s time: “Shepherd means to love, and to love also means to be ready to suffer. To love means: to give the sheep true good, feed ment of the truth of God, of the word of God, the nourishment of the presence of him.’ Dedication supported by the consolation of the Spirit, who always precedes him in the mission: in the passionate search to communicate the beauty and joy of the Gospel – Bergoglio observes again quoting the apostolic exhortation Rejoice and exult – in the fruitful testimony of those who, like Mary, remain in many ways at the foot of the cross, in that painful but robust peace that neither attacks nor subjects; and in the stubborn but patient hope that the Lord will fulfill his promise, as he promised to our fathers and to his seed forever.”

In the hands of the father

The Pontiff entrusts his predecessor to the hands of the Father: “We too, firmly bound to the last words of the Lord and to the testimony that marked his life, want, as an ecclesial community, to follow in his footsteps and entrust our brother to the hands of the Father: may these hands of mercy find his lamp lit with the oil of the Gospel, which he shed and witnessed during his life. St. Gregory the Great, at the end of the Pastoral Rule, invited and exhorted a friend to offer him this spiritual company: ‘ In the midst of the storms of my life, I am comforted by the trust that you will keep me afloat on the table of your prayers, and that if the weight of my faults overwhelms and humiliates me, you will lend me the help of your merits to lift me up. It is the Pastor’s awareness that he cannot carry alone what, in reality, he could never bear alone and, therefore, knows how to abandon himself to prayer and to the care of the people entrusted to him. God who, reunited, accompanies and entrusts the life of those who have been his shepherd. Like the women of the Gospel at the tomb, we are here with the scent of gratitude and the ointment of hope to show him, once again, the love that is not lost; we want to do it with the same anointing, wisdom, delicacy and dedication that he has been able to bestow over the years. We want to say together: ‘Father, into your hands we deliver his spirit'”.

“Look at my hands”

“His last sigh”, continued Bergoglio, “capable of confirming what characterized his whole life: a continuous surrender into the hands of his Father. Hands of forgiveness and compassion, of healing and mercy – says Francis – hands of anointing and blessing, which prompted him to deliver himself also into the hands of his brothers”. “The Lord, open to the stories he encountered along the way, let himself be chiseled by God’s will, shouldering all the consequences and difficulties of the Gospel until he saw his hands wounded by love: ‘Look at my hands’, he said to Thomas, and he says it to each one of us. Wounded hands that meet and never cease to offer themselves, so that we may know the love God has for us and believe in it. ‘Father, into your hands I commend my spirit’ is the invitation and the program of life that whispers and wants to model the shepherd’s heart like a potter, until the same sentiments of Christ Jesus throb in it. totally gratuitous: ‘You belong to me… you belong to them’, the Lord whispers; ‘you are under the protection of my hands, under the protection of my heart. Remain in the hollow of my hands and give me yours’. It is condescension of God and his closeness capable of placing itself in it the fragile hands of his disciples to feed his people and say with him: take and eat, take and drink, this is my body that offers itself for you”.