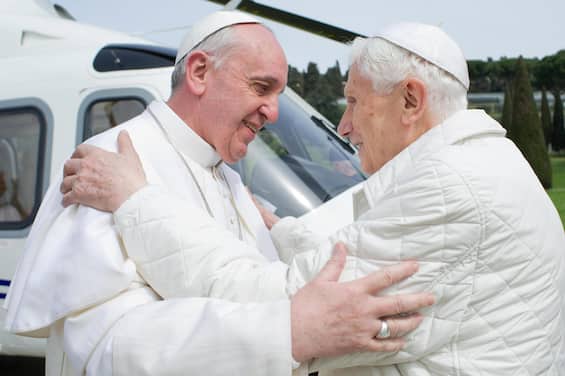 Pope Francis, at the end of today’s general audience, asked the faithful to pray for his predecessor: “I would like to ask you all for a special prayer for Pope Emeritus Benedict, who is silently supporting the Church. It is very sick, asking the Lord to console him, to support him in this testimony of love for the Church, until the end”. “Regarding the health conditions of the Pope emeritus, for whom Pope Francis asked for prayers at the end of this morning’s general audience, I can confirm that in the last few hours there has been an aggravation due to advancing age – he said know the director of the press office Matteo Bruni – The situation at the moment remains under control, followed constantly by the doctors. At the end of the general audience, Pope Francis went to the Mater Ecclesiae monastery to visit Benedict XVI. We join him in praying for the Pope Emeritus”. Ratzinger’s conditions had already worsened in the days leading up to Christmas, when he began to suffer in particular from “respiratory problems”, learns theHandle from qualified sources. Benedict XVI also spent Christmas at the former Mater Ecclesiae monastery where a house Mass was officiated for him in the chapel.

“Consolation to those experiencing the drama of war, in Ukraine and elsewhere”

“May the love of God that was revealed in Bethlehem bring consolation to our hearts, disturbed by the drama of the war in Ukraine and in other parts of the world”, Pope Francis said again in the general audience in Sala Nervi, greeting the pilgrims Poles. “I also want to thank the people of Poland for all the help they give to the Ukrainian people,” he added. “Let us remember that in the history of humanity God has the last word, because ‘everything belongs to love’ – continued the Pontiff quoting St. Francis de Sales, whose death is the fourth centenary today – To each of you, to the Polish and Ukrainian families who are currently in your homeland, my blessing”. In his greeting to German pilgrims, the Pontiff also said: “Today, on the feast of the Holy Innocents, we think of the little ones, of all the children who suffer from exploitation, hunger and war. May the Lord help us with his blessing to protect and support them”.

“Enough with the worldly caricature of Christmas”

“Let us be careful not to slip into the worldly caricature of Christmas, reduced to a consumerist and saccharine celebration”, the Pope then said. Pontiff – It is not a hypocritical do-gooder who hides the pursuit of pleasures and comforts”. “Our elders who had known war and even hunger knew it well: Christmas is joy and celebration, certainly, but in simplicity and austerity”, he added. “Another aspect that stands out in the crib is poverty, understood as the renunciation of all worldly vanity – he continued – When we see the money spent on vanity! So much money for worldly vanity! So much effort, so much research for vanity !”. “Jesus, the King of the universe, never sat on a throne: he was born in a stable, wrapped in swaddling clothes and laid in a manger; and in the end he died on a cross and, wrapped in a sheet, was placed in the tomb”, the Pope recalled. And speaking of the manger, he explained that “this sign shows us God’s ‘style’, which is closeness, compassion and tenderness. With this style of his, God draws us to himself. he takes us by force, he does not impose his truth and his justice on us, he does not proselytize with us. No, he wants to attract us with love, with tenderness”. And not with “a possessive and selfish love, as unfortunately human love so often is”. Finally, Francis indicated “a great teaching that comes to us from the Child Jesus through the wisdom of St. Francis de Sales: desire nothing and refuse nothing, accept everything that God sends us”. “But be careful! Always and only out of love, because God loves us and always and only wants our good”, he concluded.