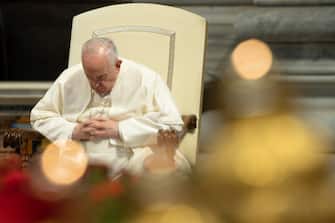 In the last period they have increased the assumptions regarding the fact that Pope Francisin the next months, can resign. The rumors circulate not only in Italy, but also internationally. However, it should be noted that the speculations are not supported by any official source and have not found confirmation at the moment

WATCH THE VIDEO: Pope announces the Consistory: there will be 21 new cardinals

As the AP itself recalls, even the Italian and Catholic media in the last period have spoken of the possibility that the pontiff will take a step back, following the same path as his predecessor, Benedict XVIdue to his problems with health

ALL THE NEWS ON POPE FRANCIS

The pope in the last month had mobility problems and he often used a wheelchair for his travels. Bergoglio suffers from pain in his right knee that does not allow him to stand for long

The “rumors” were also fueled by the fact that Francesco has recently announced the creation of 21 new cardinals, of which 16 are under the age of 80: this makes them eligible to vote in a possible Conclave to choose a new pope

Then there is another circumstance that has fueled speculations. Just as the AP recalled, Pope Francis announced that on August 28 he will go to L’Aquila, Abruzzo, for participate in the “Forgiveness”an event established by Celestino V

As he writes the post, during his short pontificate (he resigned after five months in 1294), Celestino V granted a plenary indulgence to anyone who entered the basilica of Santa Maria di Collemaggio, in L’Aquila. And since then, every year, the event that takes the name of “Forgiveness “

A pope has never attended the anniversary. And the fact that now Bergoglio wants it take part, it was understood by some as a symbolic gesture about the future of his pontificate

According to Christopher Bellitto, a Church historian at Kean University quoted by AP, most Vaticanists expect Pope Francis to resign, but not before his predecessor – Benedict XVI – dies. In the photo, Bergoglio and Ratzinger together in 2016