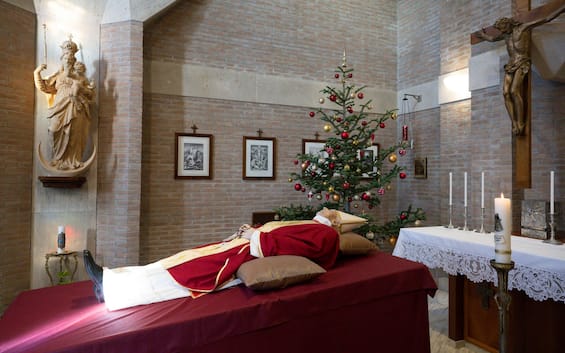 Preserving the post-mortem body of the popes in the best possible way is a widespread practice that allows the body to be exposed during the ceremonial. In fact, from this morning until the day of the funeral scheduled for Thursday 5 January, the body of Pope Ratzinger will be exhibited in St. Peter’s Basilica to allow the faithful to pay their last respects (LIVE UPDATES). The treatment used is called “thanatopraxis” and is widely used in the United States but is also gaining ground in Europe. Andrea Fantozzi is the leading expert in Italy of Tanatoprassi President and is the founder of AIT (Italian Association of Tanatoprassi) and of INIT (Italian National Institute of Tanatoprassi). In an interview with AdnKronos he explained some details of the practice: “It is a post-mortem treatment and consists of the hygienic care of conservation of the body after death, but above all it is a treatment which aims to carry out a highly hygienic process in the funeral and cemetery sector. With thanatopraxy it is possible, through an injection into the arterial system of a preservative fluid and a series of aesthetic treatments, to preserve an integral image of the loved one, thus eliminating the decomposition process for a few weeks”. (DEATH RATZINGER. THE PHOTO STORY – ALL VIDEOS – THE SPECIAL)

It was precisely the experts of Init, together with those of the forensic medicine service of the Tor Vergata Polyclinic coordinated by professor Giovanni Arcudi, who prepared the body of Pope John Paul II for conservation. In the group, made up of 7 doctors, also Andrea Fantozzi himself. “The Thanatopraxis – clarified the founder of Init – also has its advantages in the field of forensic medicine, in fact by stopping the decomposition of the body, the tissues and lesions are fixed as in a histological preparation, thus allowing investigations to be carried out more easily. In this way it is possible to better study the trajectory of a bullet and to contribute to medico-legal identification methods. In the case of an exhumation, made necessary by judicial investigations, there will certainly be better results on a treated corpse than to one in decay”. However, Fantozzi underlined that it is not a question of a perpetual embalming practice, but of “a method of temporary conservation; this means that the bodies treated with this technique can be preserved from 10 to 15 days before burial, remaining intact in any type of environment”.