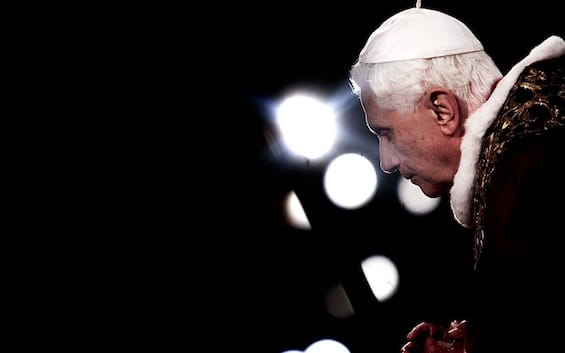 The Church in mourning: Benedict XVI has died. The Pope emeritus, born Josep Ratzinger, passed away today 31 December at the age of 95. He had been ill for some time. On December 28, 2022 Pope Francis had launched an appeal to the faithful, calling them to prayer for his predecessor: “Remember him, he is very ill, asking the Lord to console him, to support him in this testimony of love for the Church, until the end” (THE PHOTOSTORY).

The announcement of death

The announcement of Ratzinger’s death was given by the director of the Holy See Press Office, Matteo Bruni. “It is with pain that I inform you that the Pope Emeritus, Benedict XVI, passed away today at 9:34 am, in the Mater Ecclesiae Monastery in the Vatican,” he said. The body of the Pope Emeritus will be in St. Peter’s Basilica in the Vatican for the greeting of the faithful from the morning of Monday 2 January.

Joseph Ratzinger was born in Marktl am Inn, in the territory of the Diocese of Passau (Germany), on April 16, 1927. As the website recalls Vatican. va, his father was a gendarmerie commissioner and came from a farming family in Lower Bavaria. His economic conditions were quite modest. Her mother, on the other hand, was the daughter of craftsmen from Rimsting on Lake Chiem, and before her marriage she had worked as a cook in various hotels. Ratzinger spent his childhood and adolescence in Traunstein, a small town near the border with Austria, about thirty kilometers from Salzburg. He himself called this context “Mozartian”: here he received his Christian formation.

The years of his adolescence are crossed by the Second World War. He recalled seeing his parish priest beaten by the Nazis before the celebration of Holy Mass and experiencing the climate of hostility towards the Catholic Church in Germany. In recent years he was also enrolled in the anti-aircraft auxiliary services.

The priesthood and teaching

From 1946 to 1951 he studied at the Freising College of Philosophy and Theology and at the University of Munich. He was ordained a priest on June 29, 1951. A year later, he began teaching in the same school where he had been a student, in Freising. Subsequently, in 1953, he graduated in theology with this dissertation: “People and House of God in the Doctrine of the Church of Saint Augustine”. During his career he taught in Bonn (1959-1969), in Münster (1963- 1966) and in Tübingen (1966-1969).From 1969, for many years, he was professor of dogmatics and of the history of dogmas at the University of Regensburg where he also held the position of Vice Dean of the University.

His scholarly activity led him to carry out positions within the German Episcopal Conference and in the International Theological Commission. He then published numerous writings, including: “Introduction to Christianity” (1968), the 1973 volume “Dogma and Predication”, “Report on the faith” (1985), “The salt of the earth”, 1996. On the occasion of his On his 70th birthday, the book “At the school of truth” was also published. Also due to his studies, he took part as an “expert” in the Second Vatican Council.

He was appointed bishop of München und Freising (Munich and Freising) on ​​25 March 1977 by Pope Paul VI. He received episcopal ordination on 28 May of the same year: the first diocesan priest to assume, after eighty years, the pastoral government of the Bavarian diocese. Again Pope Paul VI appointed him Cardinal in the consistory of 27 June 1977. On 25 November 1981 John Paul II made him Prefect of the Congregation for the Doctrine of the Faith. On 6 November 1998 he assumed the office of Vice-Dean of the College of Cardinals and on 30 November 2002 he became Dean: he also received the Title of the Suburbicarian Church of Ostia.

On the eve of his election to the papal throne, in the Vatican Basilica, he celebrated the Holy Mass “pro eligendo Romano Pontifice” together with the 115 cardinals. He is now famous as the ” guardian of the faith ” and leader of the ” conservative ” wing of the Church. In his speech he speaks of the ”little boat of Christian thought”, ”tossed about by many waves”. Some examples he had cited: “Marxism, liberalism, collectivism, radical individualism, atheism, a vague religious mysticism, agnosticism, syncretism” and ”dictatorship of relativism”. A few hours later the Conclave that will elect him Pope begins, on 19 April 2005. His election, considered in line with his predecessor John Paul II, is greeted with a roar by the 100,000 faithful present in St. Peter’s Square and waiting for hours under the rain. Ratzinger chooses to call himself Benedict XVI in memory of Benedict XV, Pope of the First World War. He comments on his election as follows: “I am consoled by the fact that the Lord knows how to work and act even with insufficient tools and above all I entrust myself to your prayers”. Shortly before, in an interview with Vatican Radio, he had defined himself as “a simple man” : “A self-portrait is impossible, it’s difficult to judge yourself. I can only say that I come from a very simple, very humble family, and therefore I don’t feel so cardinal”.

In 2013 he announced his resignation due to his health conditions: he is the first Pope to do so in the contemporary age. The last retreat dates back to the Middle Ages (1294) by Celestino V. he pronounces the communication in Latin, in front of the cardinals engaged in the ordinary consistory in the Vatican for the canonization of the approximately 800 martyrs of Otranto and two Spanish nuns. ”After having repeatedly examined my conscience before God, I have come to the certainty that my strengths, due to an advanced age, are no longer suited to an adequate exercise of the Petrine ministry. Well aware of the gravity of this act of mine, I freely declare that I renounce the ministry of Bishop of Rome, successor of Saint Peter, entrusted to me by the cardinals on April 19, 2005, so that, from February 28, 2013, to 20.00, the seat of Rome, the seat of St. Peter’s, will be vacant and the Conclave for the election of the new Supreme Pontiff will have to be convened by those who are responsible for it”. Thus begins the era of Pope Bergoglio. At the time, Benedict XVI was 86 years old and the oldest Pope in the last century. He retires to the former monastery of cloistered nuns in the Vatican Gardens, the ” Mater Ecclesiae ‘. His conditions have worsened over the years: in 2020 his biographer, Peter Seewald, had alluded to the increasingly precarious state of health of the then 93-year-old. A few months later, according to Maltese Cardinal Mario Grech, the Pope Emeritus was already having some difficulty speaking.

“Gay wedding and abortion? Signs of the Antichrist”

His biography was published in 2020 Ein Leben, a thousand pages written by my journalist friend Peter Seewald. The Pope emeritus spoke of a crisis in contemporary society visible – in his opinion – in same-sex marriage and abortion, considered by him signs of the “spiritual power of the Antichrist”. Benedict accuses above all the revolution of the 1960s and 1970s, responsible in his opinion for the moral decay of society and for an irreversible crisis of the Church.” One hundred years ago – Benedict’s words quoted by The Republic – everyone would have considered it absurd to speak of a homosexual marriage”. The same goes for “abortion and the creation of human beings in the laboratory”. And again: “Modern society is in the midst of formulating an anti-Christian creed and if one opposes is punished by society with excommunication. The fear of this spiritual power of the Antichrist is more than natural and needs the help of prayers from the universal Church to resist”.

The accusation of covering up sexual abuse in Munich

In the course of his activity, Ratzinger was involved in the scandal of sexual abuse which took place in the archdiocese of Munich and Freising. After rejecting all accusations, the Pope emeritus then corrected his own version: he admitted that he had participated – as Archbishop of Monaco – in a meeting of the Ordinariate which took place on January 15, 1980, during which the case was discussed of a pedophile priest arriving from another German diocese. The allegations are included in a report presented on January 20, 2022 by the Westpfahl-Spilker-Wastl law firm: from 1945 to 2019 there were at least 497 victims of sexual abuse, 60 percent of these were minors between the ages of 8 and 14. age. According to the dossier, 235 are responsible for the abuses: 173 priests, 9 deacons, 5 pastoral representatives and 48 people from the school environment. Of the nearly five hundred victims, 247 are male. Ratzinger was Archbishop of Munich from 1977 to 1982 and then became Prefect of the Congregation for the Doctrine of the Faith (1982-2005). Ratzinger is accused of “erroneous behavior in four cases”. What he himself refers to is related to the priest of the diocese of Essen, Father Peter H., who was transferred to Munich in 1980 because he was accused of paedophilia. In June 2022, a victim of the latter filed a complaint against Ratzinger. Benedict XVI “was aware of the situation and at least lightly considered that this priest could repeat his crimes”, reads the complaint.