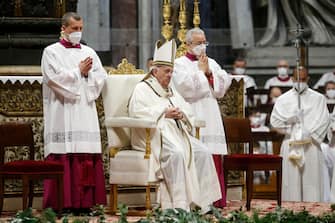 WATCH THE VIDEO: Ukrainian war, Pope: it is an outrage against God

In the afternoon, just before 4.00 pm, the Pope arrived for the Mass in Coena Domini, at the Civitavecchia prison. The Pontiff carries out a private visit with the traditional ritual of the “washing of the feet” to 12 inmates

ALL THE NEWS ABOUT THE POPE

The event a Civitavecchia it is considered a “private visit”. “We are grateful to the Holy Father – said the head of the chaplains of the prisons of Italy – for having chosen” an “existential periphery”. “Washing the feet of twelve prisoners, bending down before their poverty and weaknesses, washing the feet of those who have walked paths of violence, trampling on the rights of the innocent means for us workers a humble, incomprehensible and scandalous gesture that Jesus good Shepherd, he delivered to humanity ”

Russia-Ukraine war, Pope: peace obtained by force is only an interval between wars

Privately, in the prison that welcomes about 500 inmates, Pope Francis therefore repeats the gesture of Holy Thursday. In recent years Bergoglio has celebrated the ritual of washing the feet several times in a prison. In Rome in the juvenile area of ​​Casal del Marmo in 2013, in Rebibbia in 2015 and in Regina Coeli in 2018. And then in the maximum security area of ​​Paliano (Frosinone) in 2017 and in Velletri in 2019. Due to the restrictions imposed by Covid, the rite was suspended in 2020 and 2021

In the photo, another image from this morning in San Pietro

The Chrism Mass it is concelebrated by the Pontiff with the cardinals, bishops and presbyters (diocesan and religious) present in Rome: in all almost two thousand concelebrants