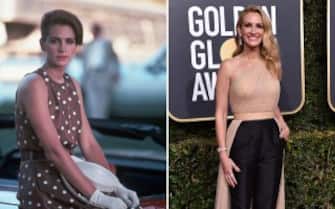 Julia Roberts. Beautiful, elegant and refined: Julia Roberts, over the years, has maintained a sophisticated look and a youthful appearance. In Pretty Woman she played one of her characters that symbolize her, “Vivian Ward”, the young prostitute who falls in love with Edward, a businessman played by Richard Gere.

WATCH THE VIDEO: Julia Roberts, 7 curiosities about the actress

Richard Gere. The American actor, despite the white hair has been with him for a long time now, maintains an innate and natural charm. In Pretty Woman, Richard Gere lent his face to the male lead, billionaire businessman Edward Lewis. At the time, the star was 41, today she is 72.

Richard Gere yesterday and today: how he was and how he is the protagonist of the TV series MotherFatherSon

Laura San Giacomo. In 1990, thanks to Pretty Woman, the hitherto unknown actress Laura San Giacomo enjoyed great success. In the feature film she plays the role of Kit, Julia Roberts’ friend and roommate. Later, she became a true star of the TV series.

The best films to see in September 2021 in streaming and in cinemas. PHOTO

Héctor Elizondo. Anyone who has seen Pretty Woman cannot have forgotten the understanding and polite hotel manager Barney, played by Héctor Elizondo. The 54-year-old American actor and voice actor starred in numerous films, including “Beverly Hills Cop III” and “Love in the Time of Cholera”.

Jason Alexander. In Pretty Woman Jason Alexander played the role of Philip Stuckey, Edward Lewis’ expert lawyer. At the time he was 31 years old, later he was part of such films as “Storm Chroniclers”, “Love at first glance” and “Joker-Wild Card”.

The plot. Pretty Woman is a sentimental comedy film from 1990, as well as one of the iconic films of those years. Behind his good looks and heartthrob fame, billionaire businessman Edward Lewis hides unrivaled financial skills. One night he accidentally meets the beautiful prostitute Vivian Ward on Hollywood Boulevard. The relationship between the two, which began as a mere job performance, will become more and more intense until love breaks out.

Planetary success. Pretty Woman is regarded as one of the most important films in the history of American cinema. The box office success is a clear proof of this: the total proceeds have been estimated at 463.4 million dollars.

The soundtrack. The film is also known for its highly successful soundtrack. The most important song is certainly “Oh, Pretty Woman” (1964), by Roy Orbison, from which the title of the film is inspired. Other songs that have gone down in history include Roxette’s “It Must Have Been Love”, David Bowie’s “Fame ’90” and Red Hot Chili Peppers’ “Show Me Your Soul”.

The awards. Thanks to her portrayal of Vivian, Julia Roberts received the 1991 Golden Globe for “Best Actress in a Motion Picture – Comedy or Music” and was nominated for an Academy Award in the same year. Among other accolades, there was also a BMFI Film & Tv Award to James Newton Howard for “Best Soundtrack” and “Best Song” at Gessle in 1990. Finally, in ’91, the film received the People’s Choice Award for the “Best Comedy Film” and a Kid’s Choice Award for “Best Leading Actress”.