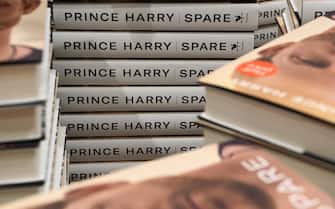 It came out today in the bookstore Spare – The minor (Mondadori, pp. 540, euro 25)the book in which it seems that Harry confessed burning truths about his life. Proceeds will go to some British charities

Harry in his biography: I used cocaine

The book is divided into three parts, with metaphorical titles: “From the depths of the night that envelops me”, “Bloody but untamed” And “Captain of my soul”. The ghost writer is Pulitzer Prize winner JR Moehringer

Prince Harry: “My father and brother don’t want to make up”

Shoot, literally “spare wheel”, “reserve”recalls the English way of saying referring to the reigning dynasties, “An Heir and a Spare” (an heir and a reserve), and in this case therefore means the younger brother of the heir designated to the throne

Among the revelations of which yes he is discussing more there is the tale of a physical assault Of Williamthe older brother, towards Harry and the fact that both Harry and William would have asked the fatherKing Charles, not to marry the current queen consort

The resentment of being the second born runs through the whole book. At some point it is told a phrase that King Charles would have said to his wife Diana the day of Harry’s birth: “Marvelous! You gave me an heir and an escort, my job is done”

Another strange passage about King Charles is when he asks Harry what will Meghan want to do after the wedding. When the son confides in the father that he thinks that she will stop being an actress it seems that Carl answered: “Well, my boy, you know there isn’t enough money. Not I can pay nobody else. I must already to pay your brother and Catherine”

Harry also tells of his first sexual intercourse and says he had it a 17 years with an older woman behind a pub and says the woman treated him like a “young stallion”. At the same age, he allegedly used cocaine on several occasions despite not being able to particularly liked: “It made me feel different and that was my main purpose”. In the book he also says he has smoked cannabis and eating psychedelic mushrooms.

Of the prince philip, Harry remembers”his coldness or icy sense of humor” and when his grandfather replied to those who suggested that Harry shave off his long beard: “Let the flowing bristles grow damn viking!”

Harry also tells of his relationship with television presenter Caroline Flack, who died in 2020. They had met in 2009 and they had begun dating: shortly after the family home of Flack had been mobbed by reporters and the two had broke off the relationship

About Afghanistan the Duke of Sussex says he killed 25 “pawns” in Afghanistan. “As I stood in the heat and fog of combat I didn’t think about those twenty-five as to persons. You can’t kill someone if you consider them a person.”

Then there is the story of when the son Archie broke a Christmas tree decoration, one that depicted the grandmother, the Queen Elizabeth. Later, going to consult a medium, Harry took heart knowing that mother Dianaaccording to the seer, had “laughed a lot” when the child had broken the decoration with the royal effigy. Detail he could not know

From the book it turns out that Harry is certainly not an avid readerbut has a favorite book: it is Of Mice and Men by John Steinbeck. Because in the protagonists, George and Lennie, sees a similarity between “Willy and me. Two friends, two nomads, who live there same experiences and protect each other shoulders”. Yet in several passages of the book he is certainly not soft with his brother

Harry and Meghan: the new trailer of the Netflix TV series