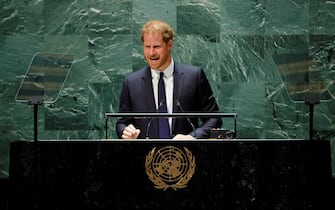 The Prince Harry he spoke up front at the United Nations General Assembly during a ceremony dedicated to Nelson Mandela. “Our world is on fire again,” said Queen Elizabeth’s grandson

WATCH THE VIDEO: Harry: like Mandela, we don’t give up even in the darkest hour

To accompany him to New York, his wife Meghan Markle

Harry and Meghan attended the UN General Assembly on July 18, the day on which the Nelson Mandela day

Harry and Meghan, from the first meeting to the farewell to the Royal Family. PHOTO

“Our world is on fire again“Harry said before the assembly, citing global warming, the war in Ukraine and the Covid-19 pandemic as examples.

Sky VOICE: Climate, science has no doubts: the man behind the crisis. WATCH THE VIDEO

“From the horrific war in Ukraine, to the backward step in the field of constitutional rights here in the United States, we are witnessing a worldwide attack on democracy and freedomthe battles of Mandela’s life, “said the prince

“The consequences of the decisions made by some of the most powerful people in some of the richest countries are felt even more deeply around the world continent of Africa“, he added

“The pandemic, the war and inflation have precipitated theAfrica in an energy and food crisis“, commented the prince, also describing the continent’s drought as” a reflection of the extreme weather conditions observed around the world ”

Harry then told how a photo of the former South African leader with his mother Dianataken in 1997, has marked his life

“When I first looked at the photograph, what struck me immediately was the joy on my mother’s face“Harry said in his speech

“This is a crucial moment, a time when multiple converging crises have given way to an endless series of injustices. A time when ordinary people all over the world are experiencing incredible pain. And right now we have a choice to make. We can become apathetic, succumb to anger or give in to despair, surrender to the gravity of what we have to face, “said Harry.

“Or – added the prince – we can do what Mandela did every single day inside that seven-by-nine-foot cell on Robben Island and every day outside of it as well. We can find meaning and purpose in the struggle. We can wear our principles like armor. Let’s listen to the advice that Mandela once gave to his son, that of never give up the battle, even in the darkest hour”

Harry and Meghan at the UN