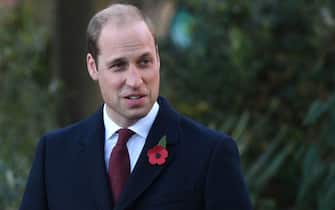 William, Duke of Cambridge, turns 40. Same smile as the late mother Lady Diana, he is considered by many to be the worthy successor of Queen Elizabeth. But before him, unless there are official renunciations, Prince Charles is in the line of succession

William Arthur Philip Louis, now Duke of Cambridge, was born on 21 June 1982 to Charles, Prince of Wales, and Diana, Princess of Wales. He has a younger brother, Henry of Wales better known as Harry (complete family in the photo)

Kate Middleton and Prince William in their modest new home

William’s youth was marked by a traumatic event: the untimely death of his mother in a car accident in Paris in 1997 (in the photo, William next to Charles Spencer, Diana’s brother at Lady D’s funeral)

William attends the University of Eton, contrary to what his relatives, faithful to that of Gordonstoun, did, earning three degrees: geography, biology and art history

After a short stint at HSBC London bank, William began his military career, joining the “Blues and Royals” regiment of mounted dragoons, then moving to the Royal Navy and Royal Air Force. In July 2017, William quit his job as a RAF rescue pilot and since then has dedicated himself to numerous humanitarian commitments: homelessness, mental health and environmental protection.

Ahead of the prince’s birthday, the Royal Mint honored him by minting a new £ 5 coin engraved with his face and the words “His Royal Highness the Duke of Cambridge”. It is the first time that a member of the royal family second in line of succession appears alone on an official currency

In 2001 he met Catherine Middleton, better known as Kate, his fellow student at St. Andrew’s University, where the prince enrolled in the same year under a false name and graduated in geography.

To Kate, William gave the same jewel given by Prince Charles to Lady Diana in 1981. The official engagement was announced on November 16, 2010 and the wedding was celebrated on April 29, 2011.

“Royal Wedding”, a fairytale wedding between William and Kate

The couple had three children: George, born on July 22, 2013, Charlotte born on May 2, 2015 and Louis, born on April 23, 2018. The little ones are respectively third, fourth and fifth in line of succession to the throne.

Passionate about polo, motorcycles (a passion he shares with his brother Harry) and fox hunting, William is patron of the English Schools’ Swimming Association, president of the Football Association and royal vice patron of the Welsh Rugby Union (WRU)

Coinciding with his 40th birthday, Prince William decided to leave London and move to Windsor, to be closer to his grandmother, Queen Elizabeth II. William, Kate and the children will live in Adelaide Cottage on the grounds of the castle estate in Berkshire