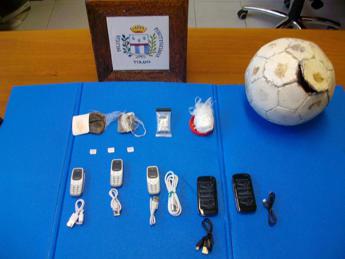 Yet another alarm for the prisons of Abruzzo: and once again the problems are centered on the use and possession of cell phones. The complaint is from the Sappe Penitentiary Police Autonomous Syndicate, through the voice of the provincial secretary Giuseppe Pallini: “Brilliant intelligence operation between the Penitentiary Police. Yesterday morning in front of the ‘Castrogno’ prison, an area used as an agricultural estate, a leather soccer ball was found with 4 micro cell phones L8 star brand inside complete with earphones, video camera and battery charger and 2 large smartphone cell phones. In recent days, the staff of the Penitentiary Police had stopped a former non-EU detainee in that area with suspicion but nothing had been found on the person at the check-up. Since there was a well-founded suspicion that the presence of the ex-prisoner was not a coincidence even as a result of information obtained from other subjects, targeted checks were set up around the entire perimeter of the institution in order to find suspicious packages or objects “.


Sappe underlines how “once again the prison police, despite the scarce means available and the lack of personnel, managed to intercept illicit objects destined for the detained population. We remind you that the introduction of mobile phones and the use of mobile phones and / or other communication tools is a criminal offense from one to four years. As a Syndicate, we renew the invitation to the DAP to screen with a relative cost of a few thousand euros instead of spending money to buy instruments that have not allowed us to find anything, the penal institutions thus avoiding the problem upstream ”, concludes Pallini.

Donato Capece, secretary general of Sappe, returns to solicit urgent interventions from the institutions: “We no longer know in which language of the world to say that prisons must all be shielded from the use of cell phones and any other technological apparatus that can produce communications it is equally necessary to provide for a specific criminal offense for those who are found in prison with cell phones. Prisons are safe by taking the necessary measures to enhance security levels and new Penitentiary Police Officers. Even drones, if on the one hand they have great potential for development, however, also involve countless issues in terms of privacy and security, as by their nature they are suitable for use in various illegal activities. With reference to safety in prisons, it is since 2015 that we have denounced the illicit introduction of drugs, and objects that are in any case not allowed, inside prisons, through the use of drones. Let’s think what could happen if a drone was able to transport explosives or weapons inside a prison, as has already happened in Frosinone with a murder among prisoners foiled in time… “.

“I believe that the Penitentiary Police must have a team of prison policemen specialized and experienced in the use and management of drones both from a preventive and dissuasive point of view of the phenomena of violation of prison spaces or the introduction of illegal material of any kind. other drones lend themselves well to the reconnaissance of areas close to a prison and can provide valuable help: we think, for example, in case of evasion since they allow you to quickly detect and monitor large spaces without being seen. Obviously the drone must be accompanied by tools for latest generation, for example software able to use the frames of the videos sent to the operational centers and, above all, specialized training for personnel ”.