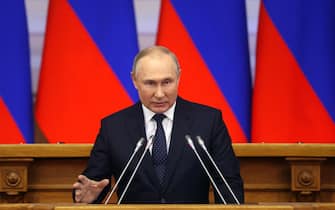 The May 9 is now a date circled in red in the calendar of the conflict between Ukraine and Russia: that day in fact Vladimir Putin could mark the change of pace in armed clashes, declaring a “total war” against Kiev. The British newspaper Independent reported the possible turnaround, citing officials from Her Majesty’s government

MAY 9TH – The presumed date chosen by Putin is strongly symbolic for Russia: that day is in fact the anniversary of the surrender of the German military forces in the Second World War. In short, it is a date of celebration and patriotic pride in the victory of the Red Army against Nazism. (In the pictures: this year’s rehearsal for the parade on May 9th)

Tactical weapons, what they are and how they are used

THE ROLE OF THE ARMY – Putin’s possible change of pace would be driven not only by the difficulties on the battlefield, but also by the frustration of the armed forces: sources of the Moscow army would have revealed to the Telegraph their “indignation” at the failure of the attack on Kiev , in the first phase of the war. Extending the conflict could therefore be a way to guarantee the army’s loyalty to the Kremlin

THE “NAZIS” OF KIEV – Furthermore, the anniversary of the victory against the Third Reich goes well with Russian propaganda, which justified the “special operation” against Ukraine from the beginning with the need to “denazify” Kiev: also for this Putin would have chosen the date of May 9 for the change of pace in the war. (In the photo: the President of Ukraine Volodymyr Zelensky)

Ukraine, Putin’s new strategy with the aim of unpacking the country

THE “TOTAL WAR” – The first change of pace that Putin could announce on May 9 is precisely in language: according to various media in fact, the tenant of the Kremlin could abandon the “special military operation” to declare a “total war” against the “Nazis” of everything the world, relying on the patriotism of the Russian people

The case of the 6 Russian oligarchs who died in the last 3 months: 4 were Gazprom leaders

THE CLASH AGAINST THE WORLD – A similar change of tune in propaganda has actually already begun: last week General Minnekaev, one of the officers on the ground in Ukraine, said that Moscow is “at war with the whole world, as in the Great Patriotic War. The whole of Europe was against us. And now it’s the same, he never liked Russia ”

MASS MOBILIZATION – And to defeat the “Nazis” from all over the world, Putin could resort to the mass mobilization of the Russian people: this was said by the secretary of defense of London, Ben Wallace. It would be a way not only to cement consensus around the Kremlin, but also to make the population accept the growing economic difficulties caused by Western sanctions against Moscow.

THE MARTIAL LAW – Among the hypotheses on the table there is also that of the declaration of martial law in Russia, as happened in Ukraine at the beginning of the invasion: a move that would give Putin the power to recall all the military forces of the country, including the reservists, and invoke the help of allies of the former Soviet bloc

THE MILITARY OBJECTIVES – It is not clear whether these possible changes will also affect Russia’s war strategy: for weeks the Kremlin has been concentrating its forces in south-east Ukraine, with the dual objective of solving the heavy logistical problems that have plagued the army in the first phase of the invasion and to “break” Kiev in two, creating a land corridor from the so-called Ukrainian separatist republics to Moldovan Transnistria, passing through Crimea and Odessa

THE VICTORY OF THE HAWK OF THE KREMLIN – It is also not clear whether Russia intends to extend the military conflict beyond Ukraine’s borders, a possibility that has not yet emerged from any source. What is instead evident is that in Moscow, in the clash between the “doves” in favor of quickly closing the war operations and the “hawks” of the conflict to the bitter end, the latter won