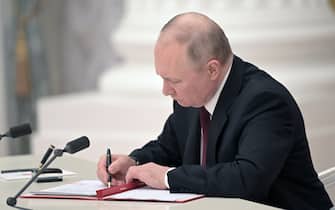 In his speech of the February 21, 2022 the Russian president Vladimir Putin formalized its intention to recognize the two separatist republics of eastern Ukraine. To explain this decision he held a long historical discourse

WATCH THE VIDEO: Russia-Ukraine crisis, what can happen now

“It’s important go back to the background of the issue to understand today’s criticality, ”he said. “Ukraine was created by Russia. It was Lenin to call it this way, it was its creator and its architect. Lenin had a particular interest also for the Donbass”

Russia-Ukraine crisis: what we know and what can happen now

According to Putin, it was “an error” of the Bolshevik leader “tear up the territories to Russia ”to create modern Ukraine. It is not the first time that the Russian president talks about the history of Ukraine by claiming that it was Lenin who created it

Already at December 2021after the year-end speech, he had written a long article “On the historical unity of Russians and Ukrainians” in which criticized Lenin’s policy of building the USSR, or forming a state like federation of republics with their own ethno-cultural identities

Russia-Ukraine, here is the situation of the forces on the ground and the scenarios in case of war

“Who did California belong to in the past? What about Texas? Was it forgotten? Nobody remembers it, ”Putin wrote, referring to two of the United States that were formerly part of Mexico. “AND we have forgotten also of those who created Ukraine: Vladimir Ilych Leninwhen he created the Soviet Union ”

The Donbass, where it is and why it is talked about in connection with the Ukraine-Russia crisis

“By doing so, the authors have planted in the foundations of our state the most dangerous time bombwhich exploded when the safety mechanism provided by the leading role of the Communist Party he disappeared, ”Putin said

In August 1991 the Ukrainian Parliament adopted the Independence Act by which Ukraine was declared an independent and democratic state. The first presidential election took place on 1 December 1991

Finally Putin judges “Another mistake” Of Lenin and of the creators of the USSR to have integrated into Ukraine territories that were foreign to it, “snatching them” from Russia, such as the Donbassthe Bukovinathe Transcarpathiaup to Crimea annexed by the USSR to Ukraine in 1954

With this Putin also wants to explain the war in Crimea of ​​2014: “The mission in the Crimea was a choice of this part of Ukraine and the Kiev government can do nothing to contradict the clear will of citizens“, the Russian president said in his speech