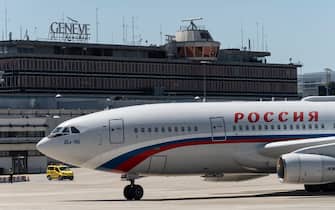 The “Putin Force One”Is the presidential plane on which Russian President Vladimir Putin flies. Renamed to recall the Air Force One on which the presidents of the United States travel, it is characterized by very special equipmentlike a button to detonate the atomic bomb and a gold bath. Here’s what is known about the aircraft (photo from 2021)

Putin’s plane model is Ilyushin II-96-300PU, the largest in the fleet, but modified and made more modern. “PU” in its name would stand for “Punkt upravleniya”, meaning “command post”. It was designed by Ilyushin Aviation Complex and manufactured by the Voronezh Aircraft Production Association. According to some estimates, the version introduced in 2021 would cost around $ 500 millionmany of which spent on the luxurious interiors (photo of 2021 at Geneva airport)

It is a wide-body aircraft, similar to the long-range ones, capable of containing two aisles for passengers, with at least seven seats side by side. It is a quadjet, that is powered by four jet engines (produced by the Russian company Aviadvigatel), and can reach maximum speeds of up to 560 miles per hour (photo from 2021)

On the outside, Putin’s official aircraft does not look very different from Russian airliners: much of the fuselage, wings and tail are White, with blue and red lines. It has the Russian flag on the tail and, in addition, it Russian coat of arms of the presidential banner in the front (photo from 2021)

Inside it has a classic style, with symbols of Russia visible throughout the furniture and elements inspired by Russian art. The furniture is made of birch wood. There are decorations with jewels and gold. The conference table finished in gold and the bathroom with toilet and bidet in solid gold. There would also be a gym, a bar, a bedroom with a king-size bed, a 10-square-meter office and a 9-seat conference room (the photo is from 2006, so an older version of the plane).

From the Cold War to the tensions over Ukraine: US-Russia relations of the last 30 years

Like any presidential plane, this one also has a command center, to mobilize troops and direct wars or fights even while flying. It features a advanced communications systemto maintain contact with the whole world, and of missile countermeasures. In addition, in the control room there is the button that Putin could press if he decides to activate the atomic bomb (2006 photo)

Aerotimenewspaper specializing in aviation, in the past he compared the Russian plane with the very famous Air Force One of the US presidents: he explained that “they are some of the largest passenger aircraft in the world and both demonstrate the best that the aeronautical industry of the two countries can offer” (photo from 2021)

The Russian one, explains the newspaper, has a slightly larger wingspan while the American one is longer and more spacious inside. Although both airplanes on the outside resemble the models they are based on, the paper continues, the interns are a long way from their commercial counterparts (2017 photo)

Both aircraft, in addition to the command center and advanced communications equipment, they have important defensive equipment: Aerotime specifies that the details are not known, but that according to some sources they should have a shielding capable of resisting even the radiation of a nuclear explosion, as well as systems to disturb communications and confuse enemy weapons (2006 photo)

According to Aerotime, “the Russian plane is also much more luxurious, with its interiors adorned with gold and gems designed by Russian artist Ivan Glazunov ”, compared to the“ rigorous’ 80s office look ”of Air Force One. But the US plane would offer a better cooking service (photo from 2021)