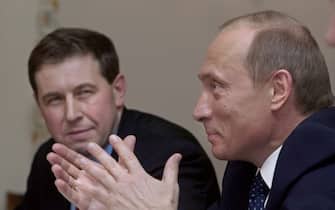 “In the short term Putin he wants to take Ukraine and then he could aim for the Moldova through Transnistria, then the Georgia and again i Baltic countries“. To say so, in an interview with Rainews24is Andrei Illarionov, former economic advisor of the Russian president from 2000 to 2005 (together in a photo from 2004)

WATCH THE VIDEO: Ukraine, Blinken: Russia is failing its goals

What it might stop the war in Ukraineexplains Illarionov, is a “true embargo” of Western countries onRussian energy

Moscow, says Putin’s former adviser (in the picture), He “does not take the threats seriously” of other countries in terms of energy, but if there was a “real embargo on exports from oil and gas from Russia, I bet that within a month or two Russian hostilities in Ukraine would probably be stopped ”

Gas Russia, which consumption could be reduced in May

The sanctions, says Illarionov, “they have started to work” but “the time has not yet come for the impacts to be seen. The sanctions they are not enough”

Sanctions by Russia against the USA: Mark Zuckerberg and Kamala Harris also hit

Illarionov (in the picture) then explains that he did not expect from Putin an invasion of Ukraine of this magnitude, but what gods signals they had already been in past years, because the Russian president would ideally want to return to the power his country had during the Soviet Union

One of the precedents Illarionov talks about is that ofKerch Strait Incidentwhich took place in November 2018, four years after the annexation of the Crimea. (In the photo the Crimean bridge over the Kerch Strait)

The 25 November 2018 naval units of the FSB and the Russian Border Guard they capturedafter opening fire, three ships of the Ukrainian Navy which were passing from the Black Sea to the Sea of ​​Azov via the Kerch Strait to the port of Mariupol (in the photo one of the captured Ukrainian sailors)

According to Moscow, the three ships had entered illegally in its territorial waters and ordered them to abandon immediately the area: one came rammedthe other two were stops from an oil tanker positioned under the Crimean bridge (in the picture). The Russians opened fire and captured the three Ukrainian ships with all of theirs 24 sailors, three of which were injured

Already then the Ukrainian government defined the incident as the antechamber of an invasion Russian, and imposed the martial law along the border with Russia and in the coastal areas of the Black Sea. (In the photo the then Ukrainian President Petro Poroshenko)