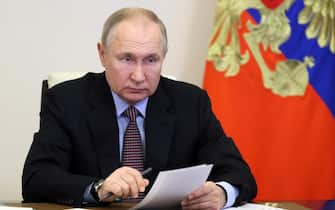 The Russian president Vladimir Putin will not hold the traditional end-of-year press conference. It’s the first time the event has been canceled in at least a decade. To confirm this to the Russian news agency tax was the spokesman of the Kremlin, Dmitry Peskov. The unusual move is driving up suspects that have been circulating for some time: Putin would be afraid to expose himself to the public, due to the situation related to the war in Ukraine

WATCH THE VIDEO: Ukraine, Zelensky: “Putin? With his death, the war would end”

EVENTS – “As for the Press conferenceit is true, there won’t be one before the start of the new year”, Peskov said, adding, however, that it is expected that the president will still find time to talk to journalists“as he does regularly”, for example during “his visits abroad”

As he points out Politic, the year-end press conference usually goes on for hours. Offer to Putin a means to talk about his political choices and highlight his successesdespite the fact that the questions of the “unscheduled” journalists have never exactly been on the agenda

There is not even confirmation that another traditional appointment on Putin’s media agenda will be held, that of phone calls with the public. The latest edition was held in June 2021, well before the war between Russia and Ukraine started

Ukraine, Russian opponent sentenced to 8 and a half years

Instead, the program would remain Putin’s speech to the United Chambers, a passage provided for by the Constitution of the Russian Federation. But even in this there is some timing uncertainty. “We will inform you in good time,” Peskov also said, quoted by the tax

Russia, Putin will not hold the press conference at the end of the year

THE VOICES – Speculations about the reasons for this retreat from the media are diverse. As happens cyclically, the hypothesis of the presumed illness of the president, who turned 70 last November. All time Politic underlines how, in recent days, Putin has been seen “unstable” at the ceremony of awarding medals for the title of “Hero” of Russia. Rumors of the Kremlin chief’s failing health have always been denied, if not completely ignored

The suspicion that bounces from one newspaper to another, in Italy and abroad, is that Putin is trying to avoid any occasion where he might be asked uncomfortable questions about the conflict launched on 24 February and still ongoing in the Ukrainian territory. The war, it has been underlined several times by international and military analysts during 2022, is not going according to the Kremlin’s plans, which expected a quick capitulation of Kiev in its favor

Even the British Ministry of Defence commented the halt to Putin’s end-of-year conference. “Although applications are usually almost certainly made early, the cancellation is likely due to growing concerns of a prevalence of anti-war sentiment in Russia”, reads the post

The Corriere della Sera underlines how, even in recent days, Putin has in fact seen himself at various events. Not just delivery medals to the Hero of Russiabut also to a TV meeting with the mothers of soldiers of the Federation, at the meeting of the Human Rights Council and to a regional political summit in Kyrgyzstan

All of these occasions, however, had been prepared in advance. When meeting the mothers of soldiers, for example, he always writes the Courier, representatives were not admitted of one of the main ones associations that deals with young soldiers. Before the Council for Rights, a decree has removed members who intended to talk about prison situation. In Kyrgyzstan, the journalists present were those of Putin’s circle

Putin, from the KGB to the Kremlin: the photo story