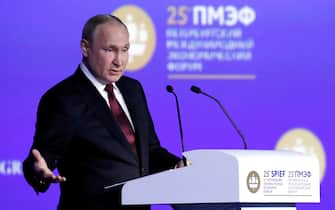 Villas, yachts, vineyards and a ski resort for a total value of 4.5 billion dollars. This would be the secret heritage from Vladimir Putinkept hidden through a dense network of interlocking joints 86 companies and non-profit organizations

WATCH THE VIDEO: Putin, the secret assets of the Russian leader

THE INQUIRY – The connection is revealed by an investigation conducted by journalists from the independent online newspaper Meduza and fromOccrpOrganized Crime and Corruption Reporting Project, relaunched in the media, for the first time since Guardian. The investigation found that all companies and organizations belong to the same domain, LLCInvest.ru

From the contents of some emails, the report reads, it would seem that the top management of these companies are discussing each other as if they were all part of the same business. A Kremlin spokesman has already denied everything, while Occrp makes it known not having received an answer give it over 100 email addresses LLCInvest.ru contacted to ask for information on the findings. The only comment I got was that of a man who happens to represent four LLCInvest companies, which he said he did not know who owns the companies

For some time, however, many of the assets involved had already been linked in some way to Putin. Adding to the suspicion is the fact that the telecommunications company running the servers is said to be close to Rossiya Bankconsidered by the United States “the personal bank” for the Russian president and other personalities close to him (in the photo, Rossiya Bank’s central office in St. Petersburg)

THE PALACE ON THE BLACK SEA – Among the assets cited by the investigation there is also a building for over one billion and 200 million dollars, located in GelendzhikBlack Sea. Already in the past the activist Navalny he had denounced that the structure – 14 thousand square meters – had been built for Putin. Ownership of the property was claimed by the oligarch Arkady Rotenberg, near the Kremlin. The report shows that official data shows that the owner is the Kompleks company, linked to another company, Binom, which has an email registered under the domain LLCInvest.ru

THE VINEYARDS – Also vineyards in the surroundings of the building would be “a hobby” that got out of hand to Putin, as claimed by Navalny. The investigation has now found that the property is officially owned by an organization founded by Gennady Timchenko and Vladimir Kolbin, men in Putin’s circle. Both were hit by Western sanctions in response to the war in Ukraine, and Kolbin was linked to accounts linked to LLCInvest.ru mail

THE YACHT – There is also the yacht Shellest – 46 meters, worth 23 million dollars – among the assets suspected of belonging to Putin. Marine traffic data recorded by the MarineTraffic portal often places it near Gelendzhik. The property is officially owned by a non-profit that the US Treasury suspects is somehow connected to Putin

THE RESORT – In 2013, Putin’s daughter got married in Igora ski resort, Leningrad oblast. The report shows that the owner would be the Ozon company, of which Rossiya Bank’s largest shareholder, Yuri Kovalchuk, holds a large stake. Again Ozon is linked to an LLCInvest.ru account

VILLA SELLGREN – Near St. Petersburg there is a large villa that the population calls’Putin’s dacha‘. It is about Villa Sellgrenowned by Sergey Rudnov, son of a close friend of the Russian president, but held through the North company, whose email account has the domain of LLCInvest.ru

THE FISHERMAN’S HUT – Always near St. Petersburg, on the banks of the Ladoga lakeanother covert property of Putin would be the mansion known as’the fisherman’s hut‘. Three companies with LLCInvest domain appear to own the land around the structure