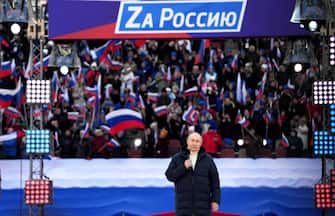 Vladimir Putin spoke at the Luzhniki stadium in Moscow, on the occasion of the traditional appointment for the anniversary of the Russian annexation to Crimea. The Russian president was welcomed by tens of thousands of people with the flags of Russia and others with the ‘z’ that has become the symbol of “special military intervention” against Ukraine

Vladimir Putin, dressed in a cream-colored turtleneck sweater and blue jacket, gave a short speech: “We have resurrected the territories of Crimea“We know exactly what we need to do now, and against whom: we will implement all our plans, he said

At a certain moment Putin’s speech suddenly stopped and the cameras showed images of patriotic chants in the same location as the stadium. According to Kremlin spokesman Dmitry Peskov, the words of the Russian president were cut short “due to a technical failure on the server”

“The inhabitants of Crimea and Sevastopol made the right choice: they overcame the obstacle in one region that was falling into Nazism, what is happening now in the Donbass “, Putin added, denouncing the” continuous aerial bombardments taking place in the region “and the “genocide in progress”.

“Our soldiers are heroic, they have never been so united,” Putin said in his speech. “We know what to do now, we will implement all our plans”he added on stage

The Luzhniki stadium in Moscow was full, inside and out, of people and national flags. Some testimonies, however, speak of public employees who would have been forced to participateliterally loaded on buses to the stadium

Vladimir Putin in his speech at the Moscow stadium he also quoted the Bible: “There is no greater love than giving your life for your friends,” said the tsar

On the screen the writings “Russia”, “Donbass”, “Crimea” and “For President” welcomed the entry of the Russian president