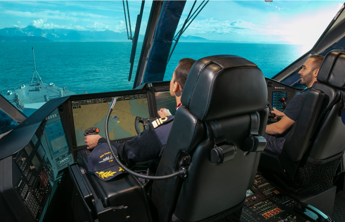 Latest generation patrol boats, 3D radar, guns on deck and the futuristic Naval Cockpit. To control international waters, in order to prevent illicit trafficking and terrorist activities on the occasion of the World Cup in Qatar which starts today, the frigate captain Emanuele Morea illustrates to Adnkronos the vehicles engaged in the field as part of the “Orice” operation “. “The Thaon di Revel ship – he explains – will guarantee the safety framework of the maritime and air space. It is a multi-purpose offshore patrol vessel, among the new and futuristic ships of the Navy. It is a program conceived, designed and built completely in Italy and which represents the state of the art of Italian shipbuilding and the national defense industry”.


“The ship was built in full synergy and deep collaboration between private industry and the Navy, in particular with its first crew. The project includes 7 units – continues the frigate captain – of which the Thaon di Revel is the first in a light version, to be followed by the Light plus and Full versions.The main novelties are the new 3D Radar with fixed faces, the first of this type designed and built in Europe, the newly developed 76/62 cannon above the bridge and the futuristic Naval Cockpit, an integrated system that allows just two operators to conduct, from one position on the bridge, both the navigation and propulsion part and the conduct of aero-naval operations through the command and control systems”.

Not only. “In the field” for the Fifa World Cup, also the innovative platform system, “which allows – the Italian Navy officer explains – the use of 4 different types of propulsion. The use of electric motors then allows the significant reduction in consumption and gives a ‘green’ connotation to these new units. Among other things, I underline how the modularity of the unit makes it multi-purpose. In fact, by loading specific containers, it is possible to change the configuration of the vessel and best adapt it to the mission it is called upon to carry out. Shelters can be logistical, healthcare, housing, but also generators of electricity capable of supporting the population in the event of a disaster”.

“It is certainly a young ship, but we have already had several operational baptisms faced with great satisfaction. I have personally followed the fitting out and construction of this unit for 3 years now – underlines the frigate captain – until the day of the delivery to the Navy, which took place on March 18 of this year. I will not deny that it is a great emotion for me and my crew to see the fruit of years of work and preparation and to see what we have managed to do in these last few months of operation” .

“We began our journey with the preliminary training carried out under the insignia of the First Naval Division, to then participate in the Open Sea exercise 22-1, which saw us engaged as the headquarters unit of the command staff for the minesweeper units. Subsequently we carried out the naval internship at the Taranto Naval Air Training Center to be declared ready for the mission – he tells Adnkronos – Our operational commitment began on August 12 and saw us engaged for the first period in support of the European operation Atalanta for the fight against piracy in the Gulf of Aden, after which the Thaon took part in the operation Agenor for the safeguarding of freedom of navigation in the Strait of Hormuz.This mission is currently under Italian command and we have been the flag unit of the operation, embarking international staff on board a ship for the first time in the history of the mission”.

In addition to the Italian Navy, there are also those of some countries in the Arab-Persian Gulf and the Indian Ocean, as well as the United States, the United Kingdom, Turkey, Pakistan and of course Qatar. “Relations are more cordial and collaborative than ever – continues the frigate captain Morea – and numerous meetings have been held for coordination at sea and with the bodies on land, but also moments of exchange and meeting to increase synergy and collaboration with our partners, in the wake of the most ancient maritime traditions and naval diplomacy”.