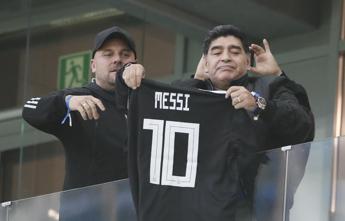 They have been the two strongest players in the world of the last twenty years, without a shadow of a doubt. They are in their fifth world championship and they started it on the wrong foot. Very bad Lionel Messi, who lost on his debut with Argentina against Saudi Arabia, archiving one of the worst defeats in the history of the Albiceleste national team. He has yet to play his first game next Thursday, Cristiano Ronaldo but the news of the abrupt end of his relationship with Manchester United is just minutes away.


Messi, for now, hasn’t managed to drag his national team along, as he has managed to do a few times in the past, at least in the appointments with the World Cup. The comment that recurs today on social media is the same one that has ‘tormented’ La Pulce throughout her career: “Messi is not Maradona”. The comparison has always been uncomfortable, but actually Messi is still chasing his first World Cup, while his football father, the best ever, is the man who was able to win a World Cup by himself or almost, the Mexican one of 1986. For Messi it is the last useful opportunity, and he started in the worst way.

Ronaldo arrived in Qatar after the tear of the interview against his club team, Manchester United with which he lived separately at home for a season and a half now. A passage that risks compromising the image of the Portuguese champion, now engaged in the last stretch of his glorious career. Even the relationships with his national teammates, starting with Bruno Fernandes who is the captain of the Red devils, help to describe an uphill world championship. The note that formalizes the consensual termination of the contract with ManUnited is certainly not a good start: “Cristiano Ronaldo will leave Manchester United by mutual agreement, with immediate effect”, the words that mark a clear break.

The next few days and the next matches will tell what Qatar 2022 will be for Messi and Ronaldo. They can continue to write history, dragging their national teams along, or they can, in fact, leave the international scene that counts. The third way of anonymity is difficult for both of them. They are, both, too big not to be protagonists, in one sense or another.