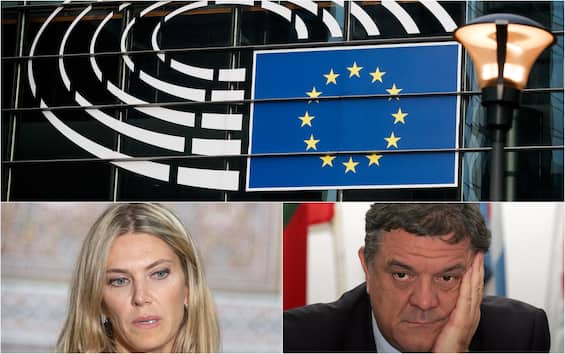 
Former MEP Antonio Panzeri and Francesco Giorgi will remain in prison for at least a month: the judges of the Brussels Court decided at the end of the first hearing on Qatargate. For the fourth arrested, for Nicolò Figà-Talamanca the electronic surveillance regime was instead ordered which allows him to leave prison. This was reported by Giorgi’s lawyer after hearing from ANSA. As far as Eva Kaili is concerned, the decision was postponed, at the request of the former EP vice president, to 22 December next. In a month the four will have to appear again in court. In the meantime, one of the hypotheses the magistrates are working on is that there may be MEPs ‘on the payroll’ to favor the emirate. And it turned out, as reported by the newspaper Le Soire and as confirmed by the Ministry of Justice in Brussels, that the judicial investigation was launched after the one conducted by the Belgian security services together with the secret services of other European countries.

Greek media: over 60 MEPs in the crosshairs

More than 60 MEPs would be targeted by the maxi-investigation on Qatargate conducted by the Belgian justice system. This was reported by the private Greek television MegaTv. The European parliamentarians who could be affected by investigations and searches, again according to the Greek broadcaster, would mostly belong to the political families of the Socialists & Democrats, the European People’s Party and other left-wing parties. The rumors were also relaunched by the German online magazine Focus.de, but they do not find any confirmation from the Belgian federal prosecutor.

The searches and the investigation

The total number of banknotes found by the Belgian police in the searches of the homes of Panzeri and Kaili amounts to over one and a half million euros. Meanwhile Giorgi, in recent days, spoke at length with the investigators. And according to sources he would have mentioned names. Like that of the Belgian MEP Marc Tarabella. “The NGOs? We need them to circulate the money”, this is one of Giorgi’s sentences which, according to what he reports Republic, appears precisely in the documents of the Qatargate investigation. Fight Impunity, the NGO founded by Panzeri, for some it would have acted as a driving force for illegal activities, but various actors of the European community in Brussels revolved around relations with Qatar and the issue of rights. In reading the four pages of the provision with which the Belgian magistrates, last Friday, arrested Panzeri, Giorgi, Niccolò Figà-Talamanca (at the head of another NGO, No Peace without justice) and the number one of the world trade union, Luca Visentini (later released from prison), it is understandable how the group, according to the accusations made by magistrate Michel Claise, moved with the aim – according to the papers – of favoring two countries, namely Qatar and Morocco.

The director of Le Soir, the Belgian newspaper that blew up Qatargate, said: “I don’t mean to say that the entire European Parliament is involved in the story, we don’t know. But in my opinion the Belgian police also have information on another country”. Christophe Berti explained that he had decided to publish the first article on the story last Friday because it was “a crazy day”, that is when the police were able to search the house of the vice-president of the Eurochamber Eva Kaili bypassing parliamentary immunity thanks to the “flagrancy of crime”. According to rumors that have emerged several times in recent days, reports Ansa, the second country involved is Morocco.

Eva Kaili’s lawyer said: “Her position is one of innocence. It has nothing to do with the Qatari bribes.” The MEP was unaware of the money found at her home, her lawyer added speaking to AFP. In Strasbourg, however, they do not seem to think so. The vote on Kaili’s dismissal as vice-president of the European Parliament yesterday was clear: 625 voted in favor. There was only one against, while there were two abstentions.

Meanwhile, the European Parliament has asked to “suspend all work on the legislative files relating to Qatar, in particular as regards visa liberalization and all scheduled visits, until the allegations have been confirmed or rejected”. This is what can be read in one of the points of the joint resolution of the Eurochamber after the explosion of the Qatargate. The text, drawn up by the main political groups of the Eurochamber, will go to the vote tomorrow at the Strasbourg plenary.

“Special Commission on Integrity and Corruption”

In the bipartisan text expected in the plenary tomorrow, the MEPs ask for “the suspension of the access badges of the representatives of Qatar’s interests” and “the establishment of a special commission on transparency, integrity and corruption”. The text also calls for the vote on “a dedicated vice president charged with matters of integrity and the fight against corruption” as soon as possible. The MEPs then urge the Commission “to present a proposal to establish an ethics body as soon as possible, in line with the resolution of the Parliament of 16 September 2021”. Lastly, Parliament calls for the EU transparency register to be strengthened by including data such as the budget and the number of staff and underlines the importance of keeping the register up to date considering that “the non-governmental organization Fight Impunity had not yet been registered”.

Spotlight on the EU-Qatar agreement on aviation

Meanwhile today, in a letter, the president of the transport commission of the Eurochamber, Karima Delli, announced: “I intend to ask the European Commission to quickly inform us about the ratification process underway of the EU-Qatar agreement on aviation and to let us know when the approval procedure is expected to start”. “I also propose to declassify all decision statements made during the coordinators’ meeting related to Qatar. Granting consent to this agreement at this stage could be difficult,” she stresses.

Rutte: “Metsola goes all the way”

And the Dutch premier Mark Rutte also expressed his opinion on the matter arriving at the EU-ASEAN summit: “I am in shock at the news that emerges on these cases of corruption but I was also struck by the reaction of the president of the European Parliament Roberta Metsola in the last few days : he has my full support to go through with it.”

Tajani: “Hit bad apples, do not delegitimize the EU”

From Italy, on the other hand, the Deputy Prime Minister and former President of the European Parliament Antonio Tajani spoke, according to which the Qatar affair “impressed me a lot, but the European institutions are not corrupt, if there are bad apples they must be sanctioned, but one must not all the grass is a bundle. There are corrupt people everywhere but I defend the institutions to which I have dedicated 30 years of my life. No one has ever come to us with a briefcase. If we delegitimize the institutions, the populists win, those who want to destroy everything. I am for justice but I distrust populists and justicialists”.