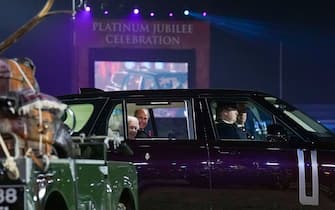 WATCH THE VIDEO: Carlo replaces queen at the opening of Parliament

The appearance of the 96-year-old sovereign, around whom in recent times there had been concern for her health conditions, made the UK breathe a sigh of relief: this is how the British tabloids welcomed Elizabeth II’s participation in last night’s event

GB, Prince Charles reads the Queen’s Speech instead of Elizabeth: “Support for Ukraine”

The queen has appeared joyful and smiling

Elizabeth II reappears in public at the parade after the Queen’s Speech forfeit. PHOTO

Elizabeth II in the audience during the show

A moment of the event attended by the queen, with Helen Mirren on stage

All news about Queen Elizabeth

The sovereign has arrived aboard a Range Rover

On board the car, Elisabetta made the very short journey from Windsor Castle, which has now become his permanent residence

The Queen Elizabeth aboard the Range Rover

As has been happening for some time now, for his walking problems the queen used a stick to move on the red carpet

Yesterday’s apparition contributes to reassure the subjects on the physical condition of the sovereign, after the blatant forfeit at the institutional appointment of the Queen’s Speech in the Westminster Parliament, missed for the first time since 1963

The sovereign was accompanied to yesterday’s event by his son EdoardoEarl of Wessex, and his wife Sofia

Elisabetta attended exhibitions dedicated to the world of horse riding which was attended by international celebrities, including the actress Helen Mirrenwho played Elizabeth I in a short show, and the American actor Tom Cruisewhich introduced a performance of the royal horse artillery