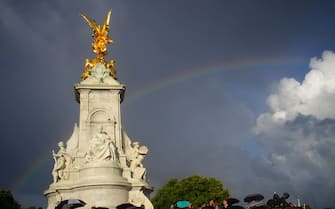 Farewell to the sovereign who reigned for 70 years. Queen Elizabeth passed away at the age of 96. From the official Twitter profile of Royal Family definitive confirmation. She is succeeded by her eldest son Carlo, who could also change his name and will be officially invested tomorrow

Queen Elizabeth died at the age of 96, Charles is the new King

A rainbow appeared above the Queen Victoria Memorial as crowds gathered outside Buckingham Palace, in central London. Shortly thereafter the royal family gave theofficial announcement of the death of the sovereign

“Her Majesty died peacefully this afternoon in Balmoral,” reads a note from Buckingham Palace. In the text it is specified, with reference to Carlo and Camilla, that “the King and Queen consort will stay at Balmoral tonight and return to London tomorrow.” The BBC followed the announcement by a moment of silence and the sound of the hymn God Save the Queen

Elizabeth, Charles is the new King. The Windsor line of succession

There traditional changing of the guard ceremony, which was supposed to take place like every day outside Buckingham Palacewas discontinued after news of Queen Elizabeth’s health

The latest news on the Queen’s health condition

This is indicated by a sign in front of the royal palace a London which reads: “No changing of the guard today”

Doctors worried about the health of the sovereign

Already in the early afternoon, the British, worried about the news bouncing around in the media, were there gathered equally out of the building in a symbolic hug

Outside Buckingham Palace le troupe of the television broadcasters of all the world they waited for a signal. L’England all she stopped with bated breath. L’public broadcaster BBCwho is dedicating a long direct toeventsuspended normal programming and changed the schedule

London Bridge is down. London Bridge collapsed. For the disappearance of Elizabeth II, the Palace has ready a plan in several versions, continuously updated over the years and held by Buckingham Palace, the government and the BBC. A kind of protocol to be followed to allow the preparations for the last farewell, maintaining that order and stability of which the sovereign, who survived 12 US presidents, has always been synonymous, in her over 70 years of reign

Operation London Bridge, here is the protocol for the death of Queen Elizabeth

Confirming the attention of the whole world on what happened at Balmoral this afternoon, the family site real went in tilt after the spread of the news concerning the worsening of the sovereign’s health. An error message appeared on the monitors saying: “Gateway time-out”

All 4 children of Queen Elizabeth arrived at his bedside in the Scottish residence of Balmoral, after the news of the worsening of his condition. After the heir to the throne Charles, who came first together with his wife Camilla, the princes also arrived Anna, Andrea and Edoardo, second, third and fourth child of the sovereign and the deceased Prince Philip. Edoardo is accompanied by his wife Sophie, daughter-in-law very close to Elizabeth II in recent years

Queen Elizabeth: the most famous speeches, from 1940 to the last of Christmas 2021