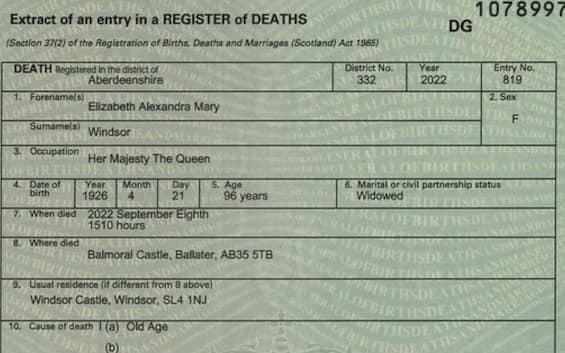 The queen passed away from old age. Ten days after her funeral, to reiterate it is the Records Office of Scotland. The Scottish Registry has issued a copy of the death certificate, which specifies the day, time, place and cause of death.

In the text it is indicated that Elizabeth II died theSeptember 8 at 15:10 (local time), in Scotland, within the Balmoral Castle to Ballater. But above all we read the cause of death: the old age. It seems obvious, but it is not obvious. Every aspect of the life of the monarchs is accompanied by formal acts and official documents that are loaded with meaning. An existence marked by protocols, formalities and rules, right up to the end.

The most interesting information contained in the certificate relates to the time. The time stated in the document shows that, when Buckingham Palace confirmed the news of her death, the Queen had already breathed her last three hours. The rumors were already circulating and the news of the worsening of her health conditions suggested that the fateful moment had arrived even for the longest-lived British queen. Also thanks to the press release published by Buckingham Palace at 13:30in which it was stated that, following a reassessment of his condition, the doctors had expressed worry and recommended that he remain under medical surveillance ”. Fans of her outside and inside the UK were prepared for the worst.