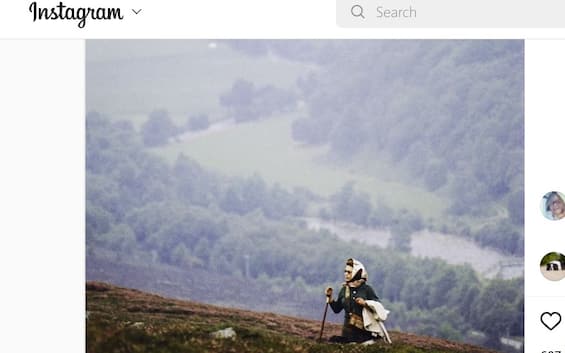 Head scarf, dark glasses and cane in hand. An unprecedented image of Queen Elizabeth, 45 at the time, walking alone on the Scottish moors. The photo was taken in 1971 during an excursion to Balmoral. To immortalize her Majesty of her in a solitary walk surrounded by greenery was Lord Lichfield, cousin of the late Queen. The royal family for the first time wanted to share this intimate memory of the late Queen with everyone on social media. The photo has received over 600 thousand likes on Instagram.

The photo posted by the Royal Family on Instagram is the only image of the Queen walking alone on the Scottish moors. Her Majesty used to go to these places surrounded by greenery to rest, always accompanied by her husband Prince Philip, Duke of Edinburgh, who died in 2021. There are many shots that portray them happy and smiling lying on the grass of the Scottish moors.

“May the flights of angels sing to you at your rest. In loving memory of Her Majesty the Queen ”. These are the words that accompany the unpublished photo of Queen Elizabeth on the Scottish moor. A quote from Shakespeare’s Hamlet delivered from King Charles III’s first speech to the nation the day after the sovereign’s death.