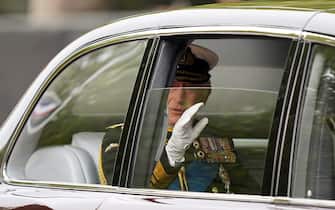 The world greets you Queen Elizabeth. Today – Monday 19 September – it’s time for the solemn funerals for the former British monarch, who passed away at the age of 96 on 8 September. Many leaders from all over the world arrived at Westminster Abbey, where the funeral for the longest-lived ruler in English history is celebrated. In the photo, King Charles III upon arrival at Westminster Hall, where the procession of the coffin to the abbey started

At around 10:40 am Elizabeth’s coffin was raised from the bier. In the photo, the arrival of the Princess Anna at Westminster Hall

Behind the coffin were first of all Elizabeth’s children: King Charles, Princess Anne, the Duke of York Andrea Mountbatten-Windsor, the Earl of Wessex Edward. Then, in the second row, Elizabeth’s grandchildren, Prince of Wales William and Duke of Sussex Harry (the latter in civilian clothes) marched

Funeral Queen, who is the Duke of Norfolk who organized the funeral

While the coffin was being taken to the abbey, they drove there together for the funeral ceremony queen consort Camillathe princess of Wales Kate Middletonthe little Prince George and the princess Charlotte

Farewell to Queen Elizabeth, the special of Sky TG24

The brothers William and Harry together with their wives, Kate Middleton and Meghan Markle

Meghan arrived at the abbey together with the Countess of Wessex, Sophie Helen Rhys-Jones

The Duchess of York, Sarah Ferguson