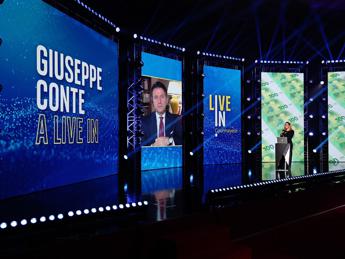 “I talk continuously with Grillo, chatter about quarrels is false”

“We do not rely on fireplaces, we will rely on an internal discussion with parliamentarians, to try to focus on what is the ideal profile to have at the Quirinale a personality of great prestige, strongly representative of the moral, cultural and institutional wealth of the Italy”. Thus the president of the M5S, Giuseppe Conte, guest at SkyTg24 Live in Courmayeur.

“After that we will have a confrontation starting with the center-left, which is our privileged interlocutor but not disdaining the comparison with the forces of the center-right, because I believe it is a moral duty to widen as much as possible the field of election of the new president of the Republic “, who can represent everyone and consequently also the center-right, said Conte.

“In the abstract – he later stated – the possibility that the mandate of the President of the Republic is not renewed is legitimate. We can also change the Constitution but I do not think this will change the ideas and beliefs of President Mattarella. In my opinion Mattarella does not deserve to be yanked, we respect his wishes and let us calmly approach the moment of choosing a person who is the guarantor for everyone “.

As for Berlusconi, “I have already stated openly and transparently: with all due respect to President Berlusconi, who is the leader of a majority force that supports the government, he will not be the candidate of the M5S” It reaffirmed.

The positive judgment recently expressed by Silvio Berlusconi on the usefulness of the DRC “is something that merits him – he added – because it demonstrates Berlusconi’s sensitivity towards a problem of social equity, absolute poverty and therefore also of remedies and safety belts that can guarantee social cohesion. It was a very prudent exit, but putting this exit in correlation with the election to the Quirinale seems to me to offend the absolutely genuine sensitivity shown by the president of Fi “.

“I often speak with Beppe Grillo and we are constantly confronted. Sometimes reconstructions come out that are nothing more than chatter, a useless pretext and controversial bla bla. Quarrels … freezing, absolutely not so “made it clear the president of the M5S, denying the disagreements with the founder of the movement on the usefulness of having adopted the financing that derives from voluntary payments from citizens.

“As regards the 2×1000, it should be remembered that this is a request that emerged in the States-General that took place last year, approved almost unanimously by the assemblies of the M5S parliamentarians. We passed from the vote of the members, from which we received the request to activate this form of financing – added Conte – it is not a question of distorting our identity, as has been trivially written, but we have collected an instance of our base that asks us for more intervention and roots in the territory “.