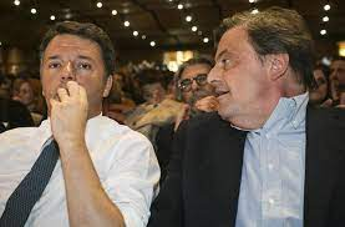 The moves of Renzi and Toti in view of Colle, a ‘package’ with over 70 votes. For Action “there are those who want to weigh in Parliament, we aim for double-digit elections”.

About fifty in the Chamber and 25 in the Senate or over 70 electors for the Colle. A not insignificant package of votes in view of the election of the President of the Republic. Italia Viva and Coraggio Italia are working on it. There is talk of a federation at the parliamentary level. The confrontation is ongoing, especially in the Senate.

Contacts have intensified in recent days and there would have been between Matteo Renzi and the group leader of IV in Palazzo Madama, Davide Faraone, on the one hand, and some big names from Coraggio Italia on the other, namely the Ligurian governor, Giovanni Toti and the senators Paolo. Romans and Gaetano Quagliariello. “We are working on it seriously,” says Ettore Rosato, president of Italia Viva, to Adnkronos.

Contacts that have also been extended to Action and More Europe. According to Adnkronos, however, the meeting did not lead to an understanding with Carlo Calenda. From Action circles it is reported that fairness was appreciated for having shared the project or an operation with a first step on the Quirinale, to then weigh more in the government. “We wished him good work”, he explains, pointing out that Action is not interested in the theme of a center, but “an innovative proposal, a break from bipopulism. We work in the country more than in parliamentary groups”.

Toti, ‘dialogue with Iv does not go against center-right interests’

In short, explain the same sources, Action together with Più Europa (also in view of a strengthening of the joint action already in the field in the Chamber and Senate) continue on their way. “Without making judgments. There are those who think they weigh more in Parliament and who, like us, reach double figures in the elections”. And then, they reason, if the electoral law does not change “Toti is back in the arms of the center-right in a moment …”. Carlo Calenda himself intervenes to make it clear: “Italia Viva and Coraggio Italia? I wish him all the best, after which Italia Viva said he is on the left, Coraggio Italia swore he is on the right, now they join together to count more at the Quirinale. It does not seem to me a political project, but an operation that has a very limited horizon, but they go wherever they want “.

If Calenda goes its own way, the work of Italia Viva e Coraggio Italia continues. A big member of Coraggio Italia explains that the aim is to create a sort of ” consultation pact ” to better coordinate in Parliament. At least for now, then we’ll see in the future. Luigi Brugnaro does not speak, but they report that he remains an attentive observer of these movements, recalling that the dialogue between him and Renzi has never ceased.

In confirmation of an ‘open channel’ between Iv and Coraggio Italia, Toti’s words arrive on the sidelines of a Uil conference in Genoa: ” Dialogue with Renzi? I believe that at this moment talking with everyone is in the interest of the country system, especially when it is necessary to choose the guarantee authorities such as the President of the Republic. And then it’s not something that goes against the interests of the center right ”.

Rosato, ‘we want to strengthen the area that supports Draghi’

But Rosato makes it clear that Iv will not support biased candidates. “We – replies Rosato – are in favor of the widest agreement. We will not vote for a candidate from the center-right or the center-left”. Who could interpret this broad sharing? “This is not the time for names.” But is Iv moving to the right? ” No, if anything, the opposite. We started the dialogue with Coraggio Italia – Rosato rebrand – just when they have unmarked themselves, claiming their autonomy over the choice ” with respect to the center-right.

We, Rosato continues, “are thinking about how to strengthen an area that believes in Draghi’s work and that supports him with conviction and not out of necessity.” , of course we are convinced that there is no one better than Draghi to lead this complex phase ”.