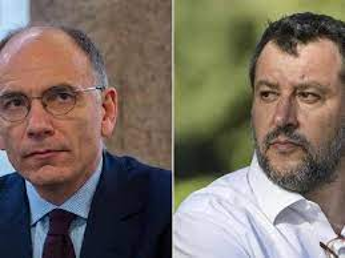 Pd Secretary: “Tomorrow I will see him, I want to understand if declarations on the prime minister ultimative or not”

In the evening, while Giuseppe Conte tells the great Grillini voters that the 5 Stars have no foreclosures on a center-right name unlike Pd and Leu, Enrico Letta accelerates the game on the Quirinale. Speaking on TV from Fabio Fazio, the dem secretary makes clear the theme of Mario Draghi’s candidacy for the Quirinale. He announces that he will see Matteo Salvini tomorrow and that at the first point of the interview he will make a clarification on the figure of the premier: “I want to understand if the statements made”, the no to Draghi al Colle, “are final or not”.

And on the table he also puts another point on the agenda: the Mattarella bis. “For us it would be ideal, we will also talk about this”. Letta takes the initiative and prepares for the – perhaps decisive – meeting with Salvini by publicly putting on the table the options capable of being able to better safeguard the legislature and the government, according to the dem. Letta repeats it again tonight: “The only majority there is, is the one expressed by the Draghi government”. And only from an agreement on a shared name within the majority passes the possibility of not blowing everything up.

Today Salvini’s no to Pier Ferdinando Casini has been read as a possible step forward towards Draghi by some of the dem. “Yesterday was a complex day for the center-right and I understand that there is a need for an evolution” but, says Letta, “I am optimistic that we will find a solution within 48 hours, maximum 72 hours”. Meanwhile, among the dem parliamentarians there is a strong fear that a completely different scenario could develop between now and those 72 hours. There is a fear that the center-right will have an “insidious” name that could jeopardize the holding of the 5 Stars.

“It seems that we are at the starting point – says Letta on TV – because in recent weeks the right story has not been told because it was that of a majority that allowed the center-right to express the President of the Republic. There is no majority, c “It is only what the government expresses. We say to the center-right do not candidate one of you, we do not candidate one of us: we need a super partes candidacy. I believe it is possible to do so”.

Then he announces the meeting with Salvini. “Draghi is one of the hypotheses on the table. I was quite amazed to see Berlusconi’s statement yesterday in which he said no to Draghi, president of the Republic, which Salvini confirmed today. These are issues we will discuss with the representatives of the center-right, with our own allies and we will try to understand, with respect to Draghi, what the true position is, whether the statements made are final or not “.

For Letta, Draghi is a “resource to be preserved” and one cannot “absolutely” run the risk of losing him both in the government and in the Quirinale, “for this reason my commitment, ours as Pd but also applies to our allies, is not only to protect the Mario Draghi resource and to find the best solution “. And he concludes: “I count on arriving in two days at the agreement that we all want in the interest of the town and at the height of the seven-year period of Mattarella”. After the meeting with Salvini it will be understood whether Letta’s wish is destined to remain so or not.

Meanwhile, tomorrow morning at 11 Letta will see Giuseppe Conte and Roberto Speranza with their respective group leaders to agree, first of all, on the line to be taken in the classroom at the first vote. White card is the indication already arrived today from the meeting of the great voters Pd, M5S and Leu. A name was also put forward today, that of Andrea Riccardi.

This is not a flag candidate but an “ideal profile”, as Letta defined him. A moderate profile that counts on a wide transversal consensus even in the variegated world that makes up the Mixed group, in a part of Forza Italia and also in Fratelli d’Italia. A name not to be ‘burned’ as a flag candidate but to be opposed to the center-right in the event that they propose an indigestible name. It is no coincidence that the name of the founder of Sant’Egidio came out, a personality that symbolizes hospitality. And the sender of the message is obviously Matteo Salvini.

It is no coincidence that today no one in the assembly of the great Pd voters spoke on Riccardi’s name, as he is not on the pitch at the moment. After Letta’s speech, there was no debate. No deviation from the secretary’s line. However, there is no shortage of distinctions. If Letta raises in clear text on Draghi tonight, parliamentary sources Pd report that the hostility of the Franceschini area over the move of the premier to the Colle is resisting.