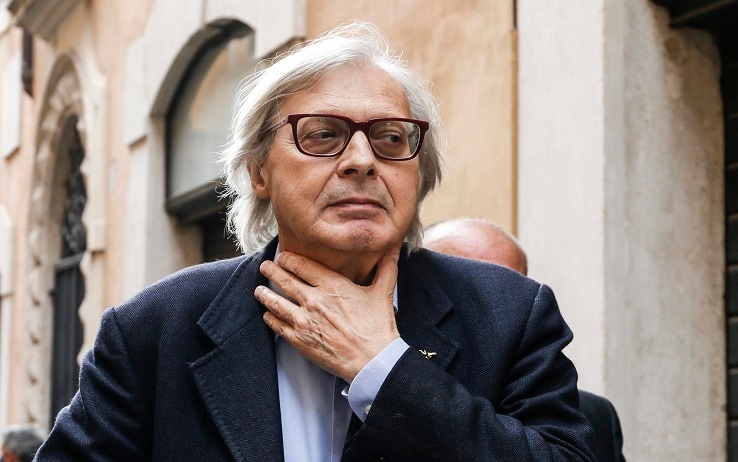 A few days before the start of the vote to elect the President of the Republic, Silvio Berlusconi’s chances of reaching the Colle seem to have further reduced. Sgarbi defines the feat as almost impossible and says that he himself should call the deputies to convince them to vote for him. Tajani points out to Sky TG24: “Speak in a personal capacity”. Salvini thinks of other names and negotiations continue even within the M5s. Meanwhile, today I meet Draghi-Fico

The squirrel operation, destined to seek consensus outside the center-right to elect Silvio Berlusconi as President of the Republic, seems destined to fail. The hypothesis was aired by Vittorio Sgarbi, who in these days is making the rounds of phone calls to parliamentarians with the former prime minister. “He lacks about 100 votes, then at least 30 will be out among no vax and sick people who cannot vote, and there will be at least 20 snipers: he does not start with 450 votes but with 400. You have to reassemble 105, and if you have 110 phone calls to make it would just take the miracle of heaven for everyone to say yes, ”he told A Sheep Day. According to Sgarbi, the only chance for Berlusconi to reach the Colle is to obtain the support of Renzi, but there is little hope.

The possible ways for Berlusconi

The election of the President of the Republic will officially start on January 24 at 3 pm. For the occasion, the major electors – that is, the parliamentarians and regional delegates – will not gather in a single space as usual, but will vote by time slots. , 50 at a time. First the senators will start, then the deputies and finally the parliamentarians. Silvio Berlusconi has been working for a long time for his possible election, but according to Sgarbi the operation to take him to Colle has “objectively” stalled. The art critic says that he saw the Prime Minister “quite sad” and that it is possible that he is thinking of “an honorable way out, with a name he likes, perhaps Mattarella”. However, possible support for Mario Draghi, another possible candidate for the Quirinale, is excluded. Proposing him, Sgarbi told Rai Radio 1, is a move that both he and Gianni Letta have advised Berlusconi to corner the others, “but he does not prefer it”. According to the deputy, Berlusconi should be the one to call the parliamentarians to convince them to support him and, if he fails to do so, he should be the one to propose another name. There are, however, those who do not like Sgarbi’s intervention and resize his words. “Speak in a personal capacity”, Antonio Tajani pointed out in an interview with Sky TG24.

Tajani on Sky TG24: “Sgarbi is not Berlusconi’s spokesperson”

“Sgarbi is not Silvio Berlusconi’s spokesperson”, in other words “Sgarbi responds to himself, he certainly does not speak on behalf of” the former prime minister, he pointed out to Sky TG24, he is the national coordinator of Forza Italia and vice president of the European People’s Party Antonio Tajani, guest of ‘Timeline’. For Tajani the center-right is still compact “there is no alternative option” to Berlusconi’s candidacy for the Colle. So Tajani specifies that no Forza Italia executive “has ever said that the party he would leave the government if Draghi were to go up to the Quirinale: we say something different, there is still a need for a government of national unity to fight and defeat the pandemic and without Draghi it would be difficult to go forward “with this commitment because” there is no a personality like him. “” Plan B? There are no other plans for the center-right until Berlusconi releases his reserve, everyone reiterated it. Until Berlusconi says what he intends to do, the center-right moves was consequently. If he has a plan in mind he will communicate it to the top of the center-right to discuss and see what to do. The time seems short for the election of the Head of State but in reality it is a lot. And as a journalist I remember that until the end no reservations are dissolved. There is therefore no change with respect to the election of the other presidents of the Republic ”.

In addition to Berlusconi, there is another political leader who is not convinced to elect Draghi to the Quirinale. This is Matteo Salvini. “Having it in Palazzo Chigi reassures me, then I am not master of the destiny of others”, he said, adding: “Everyone should tell the truth that the money from the NRR is on loan: with these energy problems, half of the works will remain on paper. Also on this we must be very careful, also for this reason the premier is complicated to remove “. According to some rumors, Salvini is losing patience even with Berlusconi and would have put him at a crossroads: dissolve the reserve and clarify by Sunday if he has the numbers, or give up the goal. Not surprisingly, the leader of the League said that for the Quirinale he is thinking of “a high-level profile” and that from Monday the center-right will go “compact on the same name, from start to finish”. A sign that there is still no agreement. Salvini has hinted that, should Berlusconi’s candidacy fail, it would be up to the Lega to make a proposal having more numbers in Parliament and that the name will be “convincing for many if not all”. But the allies disagree, not just the forceists. “Fratelli d’Italia is in the center-right but does not delegate anything to anyone. We too have our names “, said Francesco Lollobrigida, leader of the party, adding that so far the proposals have not been made explicit” in order not to damage Berlusconi’s possible candidacy “, who would remain the main candidate.

Today the Prime Minister Mario Draghi was in the Montecitorio in the early afternoon where he met, according to what we learn, the President of the Chamber Roberto Fico. Meanwhile, negotiations continue. Excluding Draghi and Berlusconi, there would be another person at the center of intense negotiations between the various political forces: the vice president of the Lombardy Region, Letizia Moratti. Sources from the center-right let it be known that this card could, however, be played only if it is the result of a bipartisan convergence. According to Enrico Letta, secretary of the Democratic Party, in general “politics must know how to look beyond appearance and immediacy.” To take stock of the situation, the 5-star Movement also met. At the summit convened by the President, Giuseppe Conte , among others, ministers Stefano Patuanelli, Luigi Di Maio, Fabiana Dadone and Federico D’Incà were present.

Among the other eligible successors of Mattarella there are Giuliano Amato, the minister Marta Cartabia, the president of the Senate Maria Elisabetta Alberti Casellati, Pier Ferdinando Casini, Paolo Gentiloni and Emma Bonino, who however pulled out. “I thank everyone who thinks of me, from Roberto Saviano to Carlo Calenda to all the militants who write to me … But I really think my moment was years ago,” he told La Repubblica. According to Giovanni Toti, governor of Liguria and co-founder of Coraggio Italia, “there is no candidate for president of the Republic who puts the government in safety: if Berlusconi were elected by the center-right plus peons, the reaction foul of those who have been totally excluded from the dialogue could put the government at risk. On the other hand, if one came to the easy choice of converging on Draghi as President of the Republic, it would be necessary to replace him at Palazzo Chigi, and build another government ”, he said in an interview with Tgcom24. “We choose a President of the Republic and at the same time we develop a political majority that ends the legislature, we check if Draghi’s government program is still consistent with the needs of the country and if possible we use this year without hanging around to make two-three reforms that are needed “.