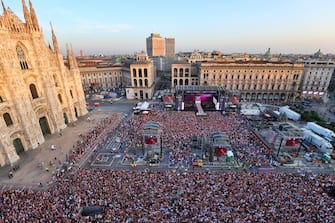 Twenty thousand people in front of the Duomo, 15 thousand left already out at 18, when the seats on the square were sold out. The return of the Radio Italia Live concert after two years of pandemic was a great celebration

Radio Italia Live 2022, the interview with presenters Luca and Paolo

Radio Italia Live 2022, the mega-gallery of the concert

The group performed three of its biggest hits: Write them stupid, White pastel And Ringo Starr

Radio Italia Live 2022, everything you need to know

Then it was Coez’s turn

Coez brought on stage Like in the songs, Red eyes and It’s always good

Gabbani sang We just wanted to be happy, The network And Vice versa

Last sang and played on the piano

Among the most anticipated artists was Elisa, who took the stage with a look that echoed the colors of the Ukrainian flag, from eye makeup to the combination of top and jacket

Or maybe it’s you, Coastal And Light (Sunsets in the North East) the trio of songs performed by Elisa

After Elisa it was Ghali’s turn, who celebrated her birthday on the stage of Radio Italia Live

Colors of Ukraine on the jacket also for Marco Mengoni, who took the stage with a crutch

Despite the injury, Mengoni attempted a few dance steps on No Stressperformed to close an open triptych with But tonight and continued with Human beings

The singer led Guarana, Vertigo and the latest single Bath at midnightthe proceeds of which are entirely destined to Save the Children for the Ukraine emergency

Among the most listened to artists in Italy, Rkomi presented himself on stage with a leather jacket as the only garment to cover his chest

The jacket flew off right after the first song, Starting with you. Look nature, on the other hand, for Unsurpassedsong brought to Sanremo

The last piece sung by Rkomi is a featuring with Elodie, The devil’s tail

The warmest applause, however, was received by Gianni Morandi

The Monghidoro singer began his performance with one of the symbolic pieces in Italy of the anti-war pacifist movement in Vietnam: There was a guy like me who loved the Beatles and the Rolling Stones

Morandi’s performance continued with Open all doors And One in a thousand. Then the singer indulged the audience with a verse of Get your mom to send you: “It’s been 60 years between this song and Open all doors“Luca Bizzarri and Paolo Kessissoglu told the conductors

After Morandi it was Irama’s turn

Irama decided to start his performance accompanied by Rkomi for Drops

Loved by the public, especially the younger one, also Sangiovanni

The singer from Vicenza followed Heaven give me the moon, Butterflies And Malibu

For the last piece, Sangiovanni allowed himself an excursion among the public in the square