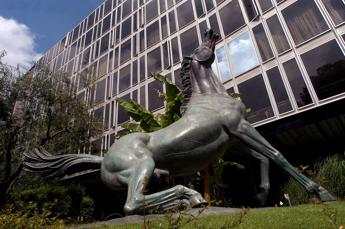 On Tuesday 1 November, the Minister of Culture Gennaro Sangiuliano will be a guest of “Porta a Porta”, the program hosted by Bruno Vespa, broadcast at 11.30 pm on Rai 1.


It is time for checks, both at school and beyond, for the boys of “Il Collegio”, broadcast on Tuesday 1 November at 21.20 on Rai 2: the time for second chances is about to end, but not all the kids seem to have it clear. To celebrate the tenth anniversary of the Constitution, the Dean is organizing a special day and invites the collegiate students to reflect on its fundamental principles. But some have trouble even singing the hymn. The issue of rights, however, fascinates young people and is an opportunity to discover something new and reveal aspirations and ideals. Confronting the cinema of ‘Pane, amore e fantasia’ is not as successful, while it goes better with another milestone of those years: Modugno’s ‘Volare’. Meanwhile, the knots are coming to a head and among those who continue to want to break the rules, those who betray the trust granted and those who refuse to study, very difficult moments are looming on the horizon: the verification of half-way is looming and the college students also experience moments of tension between them. In the end, not everyone is sure of being able to continue their experience at the College, because the grades speak for themselves. “Il Collegio”, created in collaboration with Banijay Italia, is based on the international format “Le Pensionnat – That’ll teach’em” of which Rai has acquired the rights. It is a program written by Luca Busso with Marco Cappellini, Laura Mariani, Marco Migliore, Emanuele Morelli, Marina Pagliari, Veronica Pennacchio and Alessandro Tassone. Directed by Fabrizio Deplano.

Jeff Bauman loses his legs in the 2013 Boston Marathon bombing. After regaining consciousness at the hospital, Jeff helps the police identify one of the terrorists, but his personal battle is only just beginning. It is the film based on Jeff Bauman’s autobiographical book of the same name “Stronger. I am stronger ”, broadcast on Tuesday 1 November at 9.15 pm on Rai 5. Directed by David Gordon Green, the film stars Jake Gyllenhaal, Tatiana Maslany, Miranda Richardson, Richard Lane Jr., Nate Richman.

“You can no longer make a Nouvelle Vague film today just as you can no longer make an entirely neorealist film. These are moments in history where style, content and Gestalt have combined. I too have been part of historical moments, like the Hollywood of the 70s. But I believe that, with the advancement of time and technology, there is no turning back. You could no longer make, for example, a film noir today ”. A lucid analysis of the state of the art is perceived in the words of Paul Schrader, prominent screenwriter and director of the 70s Hollywood new wave who will be at the center of the new episode of “Wonderland”, the Rai Cultura magazine broadcast on Tuesday 1st. November at 11.15 pm on Rai 4.

“Antonello Falqui was a strange, rough, sweet character, a character you had to study. But you knew you were in good hands. He had a great genius ”. Words with which Rita Pavone recalls one of the innovators of the language of television variety, with a style all his own and recognizable over the decades, born into a family of intellectuals and raised with the idea of ​​Americanizing TV and Italianising Broadway. Antonello Falqui is the protagonist of “Storie della tv”, the Rai Cultura program with the advice of Aldo Grasso, broadcast on Tuesday 1 November at 9.10 pm in first viewing on Rai Storia. In addition to Rita Pavone, Loretta Goggi and Duccio Forzano also remember one of the great “creators” of TV and programs such as “Studio Uno” and “Canzonissima”. “He suggested we do the” Ribaltone “(a variety from 1978) where we recited, sang, made parodies – recalls Loretta Goggi -. My sister Daniela and I approached with fear because they told us that Falqui made everyone cry . Instead, he had enough fun with us. I call him “the teacher” – adds director Duccio Forzano – because he is the absolute reference point for everything I do on television “.

Darius Arya explores the undergrounds of Camerano and Osimo in the episode of “Under Italy”, broadcast on Tuesday 1 November at 20.20 on Rai 5. Both cities in the Marche have a peculiarity: two underground cities develop in their subsoil, made of caves excavated in the sandstone starting from 2,500 years ago and “completed”, as we see them today, in 1800. Environments of very high and refined architecture, rich in bas-reliefs, friezes, domes and vaults whose intended use is still uncertain: from the housing purpose to that of food preservation, to the ritual purposes to the defensive ones. In Camerano, in particular, Darius Arya – immersed in water up to his knees, narrow in damp and dark tunnels – will also explore the “Devil’s Hole”: a hypogeum that was part of the Roman aqueduct which – in all probability – it reached as far as Ancona.

The Abbey of Santa Scolastica and the so-called Sacro Speco (as well as the Abbey of San Nilo in Grottaferrata) are the protagonists of “Divini devoti”, with Professor Claudio Strinati, broadcast on Tuesday 1 November at 19.30 on Rai 5. It is the original Benedictine settlement, that of Subiaco, together with the Abbey of Montecassino. Much attention is dedicated to the reconstruction of the historical, political and religious figure of San Benedetto da Norcia. A long sequence also illustrates some of the frescoes contained in the Sacro Speco up to the cave where St. Benedict lived his youth and where he elaborated his thoughts. Great importance is given to the history of the book closely connected to the Benedictines. Above all, the library of the Abbey of San Nilo is important, which allows you to briefly retrace the crucial stages of the relationship between the Benedictines and the book, manuscript and printed.

Captain Maria Concetta Fino, commander of the Carabinieri Cites Nucleus of Forlì will be the guest of the program “Geo”, conducted by Sveva Sagramola and Emanuele Biggi, broadcast on Tuesday 1 November at 4 pm on Rai 3, to talk about Operation Pettirosso, which was carried out starting from 7 October in the provinces of Bergamo, Brescia and Mantua. This is an anti-poaching action, which has seen the forest police intervene to protect protected avian species and ecosystems, with dogs able to discover weapons, ammunition and capture tools with their sense of smell, even when they have been hidden underground.

The gestures of the conductor and the need not to indulge in blatant attitudes: aspects of the direction of an opera such as Verdi’s Traviata, analyzed in the sixth episode of “A lesson in opera by Maestro Muti”, broadcast on Tuesday 1st November at 5.05 pm on Rai 5. Muti then continues the rehearsals of the opera with the main pages of the 2nd act, full of dramatic and psychological contrasts, including anecdotes, interviews with the young artists participating in his course and the soprano Renata Scotto.