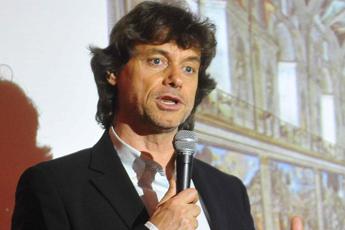 How are trulli built? From Alberobello, in Puglia, Alberto Angela reveals all the secrets of the construction of these typical limestone houses, included in the Unesco sites in 1996, in the appointment with “Northwest Passage”, broadcast tomorrow at 3pm on Rai 1. In the foreground also the explorations of Tierra del Fuego, in South America, carried out in the first half of the 19th century with the brig Beagle, the boat used by Darwin for his naturalistic research. Darwin’s story is intertwined with that of the commander of the Beagle and with that of some boys kidnapped in Tierra del Fuego and taken to England. We remain in South America, in Peru, where human bones have been discovered north of Lima within the walls of the ancient settlement of Chachapoya, characterized by sarcophagi positioned on the steep mountain wall. An archaeological expedition is on the site, found in the mid-19th century, to uncover the mystery behind the ancient burials. It ends in China where an ancient philosophy that has 3000 years of history is handed down: it is called Wu Xing. According to Wu Xing, there are five colors that dominate the cycle of life and are inextricably linked to nature, the elements and human life. Among these, green is linked to wood, childhood, spring and therefore to birth and growth.


Peppino di Capri, Roberta Giarrusso and Gianluigi Lembo together protagonists of the Luisaviaroma gala for Unicef ​​(Vanessa Hudgens, Natalie Emmanuell, Jamie Foxx, Sara Curtis, Spike Lee, Jeremy Irons) are among the guests of Pascal Vicedomini for a special episode from Capri aired tomorrow at 12 Rai 2. The program develops between the Piazzetta, the Certosa di San Giacomo and Marina Piccola where the artists move among a crowd of tourists of all kinds who make Tiberius Island one of the most popular destinations of the Italian summer. Among the memories of Peppino di Capri and Siparietti involving the brilliant Capri entertainers alongside Hollywood stars and many super models, Pascal also involves his fascinating adventure companions Caterina Milicchio, Francesca Tizzano and Aurelio Trombetta In a show that alternates moments entertainment and reflections on the environment and the quality of life, art and culture.

After wandering around half of Italy, the Rai 1 program ‘Linea Verde Sentieri’ tomorrow arrives in Puglia to tell about the lesser-known and wilder beauties of a region that has been able to make tourism and hospitality its winning card. The conductors Lino Zani and Margherita Granbassi will meet in the splendid Castel del Monte, Unesco heritage since 1996, and then split up. Of course, there will be no lack of useful information from the mountain expert Gian Luca Gasca. Lino Zani, following in the footsteps of the Italian CAI Path, will come to discover the Acquatetta wood and the extraordinary Bauxite quarry in the Alta Murgia Park, to tell not only the territory but also the most advanced rescue and cartography techniques; his journey will then continue towards Spinazzola, amidst works of art and unexpected encounters. Margherita Granbassi, on the other hand, will discover Gravina di Puglia, the incredible cliffs of Trani and the sea that just outside the city welcomes legends and spectacular views. As usual, space for local gastronomy, with bread “made in Puglia” and music that will enchant viewers, revealing an unexpected side of the splendid and beloved Puglia. The program is carried out in collaboration with the Puglia Region, Puglia Promotion and the CAI. Linea Verde Sentieri is a program by Lino Zani, Domenico Nucera, Carmine Gazzanni and Flavia Piccinni. The direction is signed by Luciano Sabatini.

On Rai Storia ‘The soldier of fortune’ – on Rai1 ‘LineaBlu’ On 13 September 1503, provoked by the offensive appreciation and the boast of the French knights who were besieging the Spaniards locked up in the Apulian city, thirteen Italian soldiers led by Ettore Fieramosca wreaked havoc on as many rivals from across the Alps in what went down in history as the “Challenge of Barletta”. The episode is re-proposed in a comic key by the film “The soldier of fortune”, broadcast tomorrow at 21.10 on Rai Storia for the “Cinema Italia” cycle. Directed by Pasquale Festa Campanile. With Bud Spencer, Franco Agostini, Enzo Cannavale, Oreste Lionello.

Tomorrow at 2 pm, a new appointment with ‘LineaBlu’ is back on Rai 1. The trip with Donatella Bianchi this week develops along the northern coast of Calabria, between Maratea, Praia a Mare and Belvedere, a coast poor in port landings, on which Maratea and its port assume an important strategic centrality. We will talk about the “Deep 1” operation, a vast and delicate investigation activity aimed at combating different types of environmental crimes. From Maratea we will move to the island of Dino, the largest of the two Calabrian islands, a suggestive rock rich in biodiversity that in the seventies the lawyer Gianni Agnelli imagined turning into a tourist destination for the international Jet Set. From the sea we will let you visit its magnificent caves, among which the Gargiulo cave, a magnificent cave with an entrance at a depth of eighteen meters, stands out for the aura of mystery that surrounds it. It will be told by its discoverers, Enrico and Rosaria Gargiulo, two pioneers of underwater photography. In San Nicola Arcella we will embark on Elettra, the first hybrid passenger transport boat active on the Italian coast. With its solar panels and its electric motor it allows you to navigate without impact on the environment. And then the beauty of the Arcomagno, a glimpse of nature famous all over the world, as beautiful and poetic as it is fragile and in need of protection. Arpacal scientists will tell us about the monitoring activities of two important SCIs of community interest, those of the islands of Dino and Cirella, with their very important posidonia meadows and colorful coral. And as always alongside Donatella Bianchi, there will be Fabio Gallo, this week between Marina di Scarlino and Cala Violina, to discover the most spectacular and wild coast of the Upper Maremma of Grosseto.

An exceptional document on the Boko Haram group, which in Nigeria, especially in the North, sows fear and terror in the name of Jihad. It is “What remains of me”, by Marta Santamato Cosentino, on air for the “Author documentaries” cycle tomorrow at 11 pm on Rai Storia. Jihadist extremism in Africa emerged in the media, especially following the kidnapping in 2014 of about 300 students in a boarding school in the city of Chibok. Since then, outrage over Boko Haram’s cruel action travels around the world via the hashtag Bring Back Our Girls. Kidnapped Nigerian girls become “our girls”, and Michelle Obama is the leader of a movement of opinion that forces the Nigerian regular army to look for them. Some of the girls freed or escaped from slavery by the terrorist group in a refugee camp in Niger on the border with Nigeria are interviewed. From their tragic story emerge the logics of terror that dominate the Boko Haram group and through the operators and scholars we understand the geopolitical logics that gave rise to the expansion of Jihad in sub-Saharan Africa. We then discover in these women a story of great resilience and difficult to reconstruct their identity.

On Rai Radio 1 ‘Radio di Bordo’ on the ‘Enea’s route’ – on Rai2 ‘Mirko’s professions and catana’ “Radio di Bordo” doubles up to 10 September. The Radio 1 Rai program, broadcast tomorrow from 11.05 am, will last one hour. Even more space to talk about the sea and its stories. In the episode of 6 August, the skipper Vittorio Alessio will talk about the departure of the “Enea’s route”, with Vito Saccà of Slow Food Trapani who will describe the galley on board. Then the adventure of becoming a mermaid with Alexander Buratti, who builds mermaid tails and wears them in water shows. Again, the fables of Peschici, with Vincenzo De Nittis, the female fishermen Giusy and Antonella Donato from “I Mancuso” who hunt swordfish between Scilla and Cariddi. There will be information from the Coast Guard, with the Commander of Manfredonia Antonio Cilento. There will also be talk of a macabre discovery on the seabed of Elba, with Umberto Mazzantini, head of the Legambiente Toscana sea, then space at the Foil Academy of the Sailing federation, with the windsurfing champion and FIV youth technical director Alessandra Sensini, and the underwater artistic performance of the painter Alfonso Cruz Suarez. Finally in Bacoli, a town in Campania that will also host two great concerts: Monday 8 August Edoardo Bennato, Tuesday 9 Enzo Gragnaniello. Unmissable, the “maritime gems”. A program curated by Raffaele Roselli. Led by Germana Brizzolari “Mirko’s trades” will arrive on the Tolfa mountains where, in the town of the same name, a production of peasant origin is preserved which has had great success: the bag called “catana”. In the episode broadcast tomorrow at 9.50 on Rai 2, the artisan Valeria will try to teach Mirko Matteucci the art of sewing. The conductor starts from scratch, like the bag he has to pack, but the result will be surprising, despite some amusing stumbles. Rediscovering the value of kindness, for a society without discrimination, a way of meeting and peaceful coexistence. It will be discussed tomorrow on Rai1, after Tg1 at 8 am, in the Tg1 Dialogo column, edited by Piero Damosso, with the comment of Father Enzo Fortunato, with stories and testimonies.