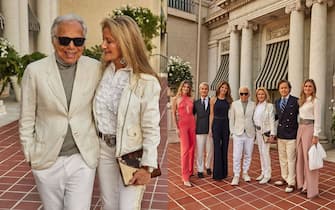 Parade of stars for the Ralph Lauren fashion show that announced last summer that it wanted to present the collection for summer 2023 in Los Angeles (and therefore not in New York, its hometown). Inspired by the West Coast lifestyle , California Dreaming it is also an ode to the stars of the star system who crowded the Huntington Library & Art Gallery in San Marino, a refined location south of Pasadena. In the photo, the designer with his wife and the entire Lauren family

Among the most prominent guests the always much talked about couple composed by Jennifer Lopez and Ben Affleck who wore Ralph Lauren custom clothes for their fairytale wedding. He is in black, in a pinstripe suit with a cowgirl hat – she uses the styling of Rob Zangardi

The most beautiful wedding dresses in movies, from Jennifer Lopez to Audrey Hepburn. PHOTO

It fell to Jessica Chastain to interpret the mood check, one of the most famous variations of Ralph Lauren’s iconic style. Here she is in a suit with blazer, cotton shirt and cigarette pants

The Eyes of Tammy Faye, the trailer for the film with Jessica Chastain and Andrew Garfield

John Legend was also seduced by the luxurious robe-style overcoats signed by the American designer. Here he poses with David Lauren, son of the designer, and his wife Lauren Bush, also granddaughter of the former president of the United States.

At the Californian reunion of friends of the brand, Diane Keaton could not miss, whose iconic style was unmistakably marked by Ralph Lauren

The Stallone family (husband, wife and two of the three daughters born to the couple) paid homage to the designer by participating in the fashion show. In the photo – from left and with a coordinated look – Jennifer Flavin, Sistine Stallone, Sylvester Stallone and Sophia Stallone

Samaritan, the official trailer of the film with Sylvester Stallone

Ralph Lauren is also appreciated by young stars who love classic and sophisticated fashion. In the photo, the couple formed by the star of Riverdale Cole Sprouse and Ari Fournier

Riverdale, Cole Sprouse reveals: “I was arrested during the protests”

Roundup of stars loved by the very young: from left, Lily Collins (protagonist of Emily in Paris) Angus Cloud (face of Euphoria) and Patrick Schwarzenegger (in the cast of The Terminal List)

The Terminal List, Patrick Schwarzenegger in the cast with Chris Pratt

Chris Pine talks about Dungeons & Dragons: “mix between Game of Thrones and The Fantastic Story”

Again faces of Hollywood and stars and stripes at the photocall: from left, James Marsden, Robin Wright and his daughter Dylan Penn and the stylist Rachel Zoe with her husband Rodger Berman

Other faces of the big and small screen at Ralph Lauren’s court: from left, the actresses Bella Heathcote, Kathryn Newton and the couple composed of James White and Grace Van Patten

Kathryn Newton, the most beautiful photos of the protagonist of Big Little Lies

Rola, model and social influencer of Bengali and Russian origins, has conquered a place among the most chic of the event with a two-tone look and a halter-neck dress – this too, a very representative model of the American designer’s style

Sangiovanni launches its eyewear collection in collaboration with ST! NG